BY GENO THACKARA
December 24, 2016
Sign in to view read count 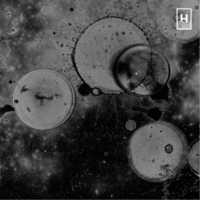 The Dutch outfit Brain//Child seems like the progeny of many different parents: besides its actual members of course, it shows touches of a range of free players, from Ornette Coleman up to current contemporaries like Ingrid Laubrock with maybe a hint of experimental laptop-ist Ikue Mori. Three members are credited with electronics in addition to instruments, which gives a hint of how far we are from a conventional set-up-and-play session. At the same time, the notes and effects alike happen in real time to maintain spontaneity.

For half the "Intro" it seems like the quintet is trying to make a sounds-of-nature jungle soundscape rather than a piece of music. Eventually the squawks are joined by recognizable drum hits and saxophone notes, but it remains about mood more than melody. From there the ride teeters somewhere between actual song patterns and abstract meanderings while staying consistently closer to the latter. The clattering drums and circular repeating sax of "S.T.E.P.H." give a beat to follow underneath some semi-harsh solo tones from the electric piano; for the next track the leads switch places and it's the Fender Rhodes that circles in the background.

From the semi-spooky ("Waste of Time") to the out-there grooving ("The Price We Pay") and the way-out there dip into noise in spots, each piece shifts the form-to-free ratio as the band sees fit and slips some smart solos among the harsher freakouts. Maybe the music isn't really going anywhere in the end, but you're welcome to challenge your ears with a group having fun as they ambitiously shoot the breeze.

Intro; S.T.E.P.H.; Between One and Two; Solo Piece; The Winding Way; Waste of Time; Can We Do One More?; Wetty Sprinter; There Will Always Be Meat; The Price We Pay.