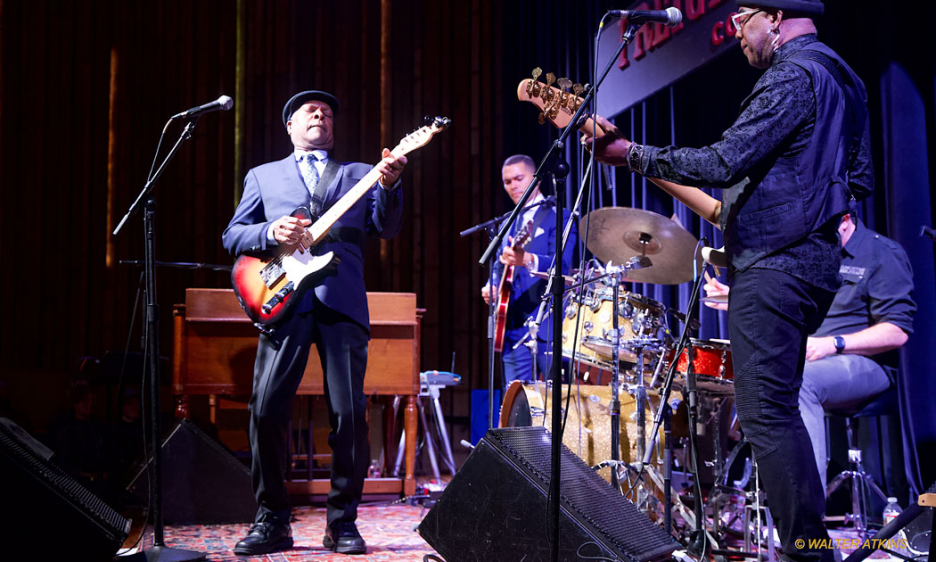 Guitarist Jones, along with bassist Brannon, took the F&S stage before the rest of the band. He asked if the house was ready for hearing some good music. The younger Jones attended nearby Cal Berkeley but..." I won't say how long ago, adding, Go Bears." He then introduced the renown composer/bandleader and father, Booker T. Jones.

Jones opened with his instrumental hit version of "Hang 'Em High," from the commercially successful Clint Eastwood movie of the same name. The potent band did a riveting version "Hey Joe" popularized by the preeminent Jimi Hendrix Experience. BTJ's arrangement of the George Gershwin standard "Summertime" had a sharp bite and featured a Ted Jones guitar solo. The senior Stax bandleader asked his guitarist son about his returning to his "old stomping grounds (SF Bay Area)."

Mr. Jones talked about the "King Brothers" (B.B. King and Albert King). He related having plenty of time to hear their music while riding with his Dad on the way to pick up his mother from her insurance job. Jones then played his blues composition "Born Under A Bad Sign" originally recorded by Albert King with the MGs. This hit blues track produced loud claps of recognition. At just 17 years old, BTJ wrote and recorded his titular 1962 Billboard Top 3 tune "Green Onions" from the first Booker T & MGs album.

In Minneapolis, BTJ recounted being there to receive a music award presented by Prince himself. Jones sang a duet of with the '80s mega hit "Purple Rain." Father and son playing guitars together on "Rain" was one of the high lights of the show. When his time came to stretch out, Dennis approached his drum kit with a happy vengeance and his solo was one of many highlights. Jones paid tribute to his friend Leon Russell with "A Song, For You." The Booker T. & The MGs' instrumental masterpiece "Time Is Tight," was performed by Jones with a serenity and expression that rose and fell while building in intensity. It was recorded for the 1968 movie soundtrack Up Tight For the encore, Jones closed with the moving Isaac Hayes—David Porter soul ballad "When Something is Wrong With My Baby" written for his Stax Records label mates Sam & Dave (Sam Moore, Dave Prater).

On this December date in Berkeley, the eminent Booker T. Jones brought home his enduring brand of music, while making it a family affair with son Ted Jones.