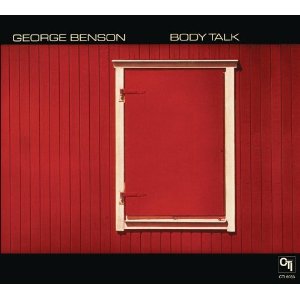 With a title like Body Talk, and a lead-off track called "Dance," George Benson—a guitar-god-on-the-rise when this album originally hit shelves in 1973—makes it clear that this music is all about feeling the groove. While a good number of Benson projects on CTI benefited from Don Sebesky's arrangements, the guitarist needed a funkier feeling for this album, and Pee Wee Ellis was just the man to provide it. Ellis helped to create the sound that defined the music of James Brown in the late '60s, becoming an important presence as an arranger on Creed Taylor's Kudu imprint, making him the perfect person to tap for horn arrangements here.

These horn arrangements become a more important presence later in the album, but the core group is in charge early on. Co-written by Benson and Ellis, "Dance" is fueled by the funky percussion team of CTI regular, drummer Jack DeJohnettel, and percussionist Mobutu and, while guitar is always the focal point, the percussion breakdown shared by both men on this track is an early highlight. DeJohnette's constantly evolving pseudo-swing underscores "When Love Has Grown," which features Benson's brilliant statements and some short solos from guitarist Earl Klugh and electric pianist Harold Mabern, but the follow-up track finds the band splitting the stylistic difference between the first two numbers. "Plum" opens on a swing feel that's both loping and lively at the same time, but the music eventually moves toward a funky rock groove, with horn riffs pushing the band forward. Benson's blazing single note lines light up the track early on and the guitarist shows great endurance, as he manages to keep the energy level high from beginning to end.

The title track opens on an Isaac Hayes-worthy background, as DeJohnette's sixteenth-note high-hat pattern keeps things locked in and the rest of the band creates funky riffs around it, but the music gets a bit punchier as time passes and the horns join in at full blast. An alternate take of "Body Talk" now occupies the final spot on the album, but "Top Of The World" was last in the running order on the original release. While the horn section brings out a certain amount of intensity in the music, the rhythm section plays things very cool here, giving the song a gentler quality as Benson takes the spotlight with some Wes Montgomery-inspired chordal melody work.

While Body Talk is occasionally overlooked, in favor of Benson's stupendous Beyond The Blue Horizon (CTI, 1973) and White Rabbit (CTI, 1973), the slick grooves, unique arrangements and stellar fretwork make this album a standout in the guitarist's long and impressive discography.