Advertise
274
Jazz and the Net

A "Grand Unification" type of harmonic theory, to be useful, has to be transportable over the entire terrain of authentic musical activity, covering as many stylizations and idioms as in existence. It must be diagnostic, generative and predictive.

All harmonic and melodic systems past and present are idiomatically bound to one or a very few stylistic areas, and are proven to be of limited usability, except within their stylistic purview.

I discovered and developed what I refer to as the Grand Unified Field Of Western Harmony, by extrapolating a new perspective on music that turned out to be holistic. I managed to do this entirely on my own from studying guitarist Pat Martino's Twelve Point Star Concept. If Martino has developed his 12-point star concept to include the ideas I will be sharing now, then it is simply my own ignorance of such a publication that has led me to believe that I have discovered this knowledge. To my knowledge, however he has publicly only intimated he would present new material based on that concept, but has not yet published anything. There was a mention of Martino developing what he termed Symmetrical Cycles back in 1982, but it was a first draft and not a published text.

Along with everyone else not intimate with Martino, or his personal drafting, I cannot know where his concept and mine overlap, to what degree—if it does—or if we have also reached the same overarching conclusions about inter-relational harmony in music. However, I need to mention this fact of my system having its roots in Martino's, for the sake of clarity and transparency.

I also believe that Ornette Coleman's harmonic and melodic system called Harmolodics is one and the same as my Grand Unified Field. But, of course, Coleman has never made clear what Harmolodics actually is, and this statement is borne of my own conjecture and intuition.

The system I am about to share, if it really is a unification of all Western harmonic practice—past, present and future—will have to be above all, absolutely practical in its application, and not weighed down by excess verbiage or nomenclature. It has to be complete. It has to be ironclad.

It has to be able to diagnose/explain/render understandable and accurate, any manner of harmonic movement, no matter how exotic or oblique, and thereby be made utterly useful to the composer or improvising musician, for in the field of improvisation in the Western jazz sense, it is well-known that musicians generate melodic-motivic material from the given harmony of their music.

It has to be generative of new musical ideas in the form of composition, arrangement, and melodic material. It has to be predictive, in a sense, of possible future developments in music. Then and only then we may call such a system or theory a great unification of what is all that exists in Occidental musical knowledge, vis-a-vis harmonic theory and its harmonic and melodic applications.

With the exception of 12-tone serialism and spectralism—which are, to me, not musical systems or theories of musical analytical and generational tools at all, but are actually mathematical models of mere note arrangements that are not based upon the natural laws of the natural world of musical sound and its physics at all—I feel that my system will explain every harmonic music practice available historically to the present, and also of music practice in potential form in the future, whether such practice is currently understood to be illogical, overly challenging, ambiguous, or merely disregarded as theoretically impregnable conventions of socio-cultural idiosyncrasies.

It is a system borne of music itself; I have been shown that it has always been inherent in music all along. It makes me an eternal student, a happy disciple of music, and I shall be studying with deep wonder and awe at the magic that is music, having found the Harmonic Unified Field.

The System Is So Simple, It Is Based On This Known Insight In Jazz Theory:

Diminished chords are respelled Dominant chords extended to the flat 9th (dom7b9 chords) without roots, and it repeats in inversions of itself over intervals of a minor third.

To This We Add:

They resolve to key centers, either major or minor, a minor third from one another.

Transposing up another minor 3rd returns us to G7 flat 9.

It it's true that the dominant chords , Bb, C# & E are the same chord when extended to include the b9 omitting the roots, then it could be that the key centers they resolve into (even though a minor third apart from one another)...are also...essentially...the same?

The implications are staggering, if not blasphemous. We are at core now in truth saying that we do not believe there are twelve distinct individual key centers available to us in the Western musical system. We are saying something truly outrageous; that there are only three key centers.

But how can this even be possible?

At the very least, I concede key centers a minor third apart have distinct intervallic characteristics that render them not literally identical to one another. Any music student can point out to me the serious number of notes that are patently not the same in the C major and F# major scales, for example. But what if these key center groups actually are so related that modulation from one of them to the other within the group was so weak, it hardly constituted a change of key at all, at least in practice? Has that even been done?

In Figure 1, the ubiquitous I-VI-II-V turnaround in the keys of C, Eb, F#, and A majors are demonstrated to be easily utilized interchangeably yielding differing but entirely musical results, and often already recognized and commonly accepted practice (in this example it seems, especially in the field of Brazilian music).

Yet, how would a music teacher explain for example the last harmonic sequence presented, namely Amaj7—D#m7—Dm7—C#7? Will the D#m7, instead of being simply what it is, be thought as a partial chord of some other convoluted twisted harmonic mechanism in a tortured attempt to explain this harmonic movement, without resorting to the Grand Unified Field? Will the C# Dominant chord resolving into the key of A major (#IVm7-Imaj, already a head scratcher) be thought of as theoretically anomalous, but common in some backward or unschooled styles of hoi-polloi musics? One would have to present a rather long and circuitous route to describe such a straightforward chord motion as this, if using only present-day known harmonic theory. While this new theory is based on standard harmonised scale theory, it fully accounts for any known instance of deviation from it, as I will try to prove in this and upcoming articles. 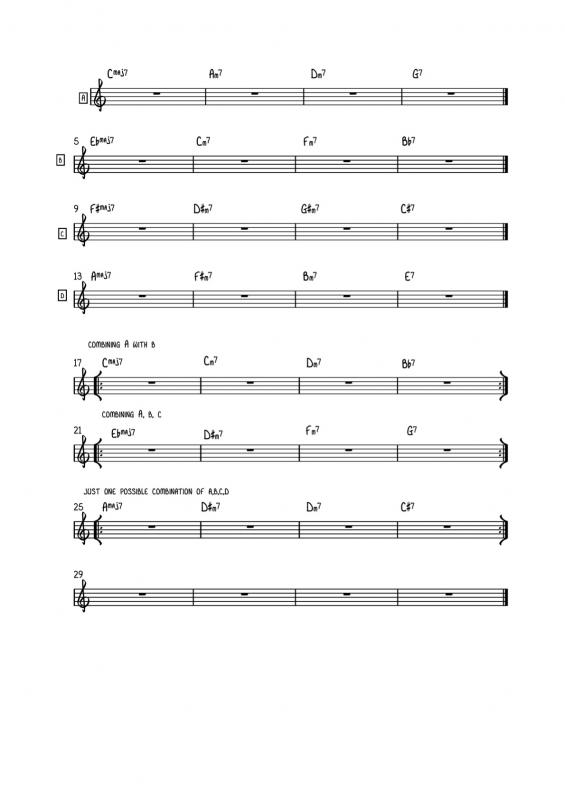 I have managed to chart out every possible combination of chords that function as subdominant to dominant to tonic movement given a single key center, or rather a single set of cyclic key centers. It is my preference to call it a polytonal center. Poly, since it not singular; yet center is singular. A compound singularity, as it were.