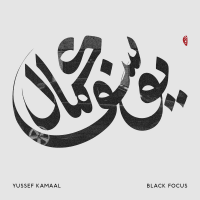 If people still think that the capital of jazz is New York, surely they've never been to London or listened to anything that comes from the British capital these days. Just like New York, London is a melting pot. Because you can find musicians from any part of the world, the produced outcome is extremely cosmopolitan. Yet, since London never had such a rich history of jazz as New York, the music tends to carry a very different vibe while essentially being part of the same tradition. Yussef Kamaal is a perfect illustration of such phenomenon.

The band officially consists of Yussef Dayes on drums and Kamaal Williams on keyboards. However, additional instruments (e.g. electric bass, guitar, trumpet, etc.) feature in the majority of the tracks on Black Focus. The album is rhythmically saturated: a few tracks feature additional percussion, which in combination with a standard acoustic drum kit add an exotic flavour to the entire mix. Artificial sound effects on keyboards, trumpet, and guitar applied to most of the tracks have a huge impact to the overall sound, too. Yet, since the drums and the bass are left without much additional processing, the sonic template sounds well balanced as most of the tracks have a solid acoustic base giving Black Focus a trance-like feel.

Yussef Kamaal states that their musical inspirations derive from artists such as Robert Glasper, Kamasi Washington, Herbie Hancock, Mahavishnu Orchestra, Thelonious Monk, or Kaidi Tatham. That might be very true, but in terms of the rhythmic vocabulary, harmonic progressions, choice of instruments and their sonic textures, music on Black Focus also resembles Jamiroquai, Brand New Heavies, or Incognito—bands that were described as being part of Acid Jazz movement. While labeling the band as Acid Jazz collective would be as problematic as trying to define the term itself, it does explain why Yussef Kamaal is under the wings of Gilles Peterson and his Brownswood Recordings label. After all, it was partly because of Peterson that the term Acid Jazz emerged.

There are two types of tracks on Black Focus—with and without melodic improvisations. Perhaps, this split is the main problem with the album. Tracks featuring solo improvisation make the music sound outdated, while tracks without melodic soloing articulate something extremely fresh and radical, jeopardizing the whole modern jazz paradigm that for so long enchained the music. If only Yussef Kamaal had more confidence to follow such a solo-less direction, the album could have benefited more in terms of its internal coherence, innovation and a healthy dose of anarchism. Nonetheless, despite the division, Black Focus is a forward-looking sonic journey that will fill one in on what's happening in London's jazz scene right now.