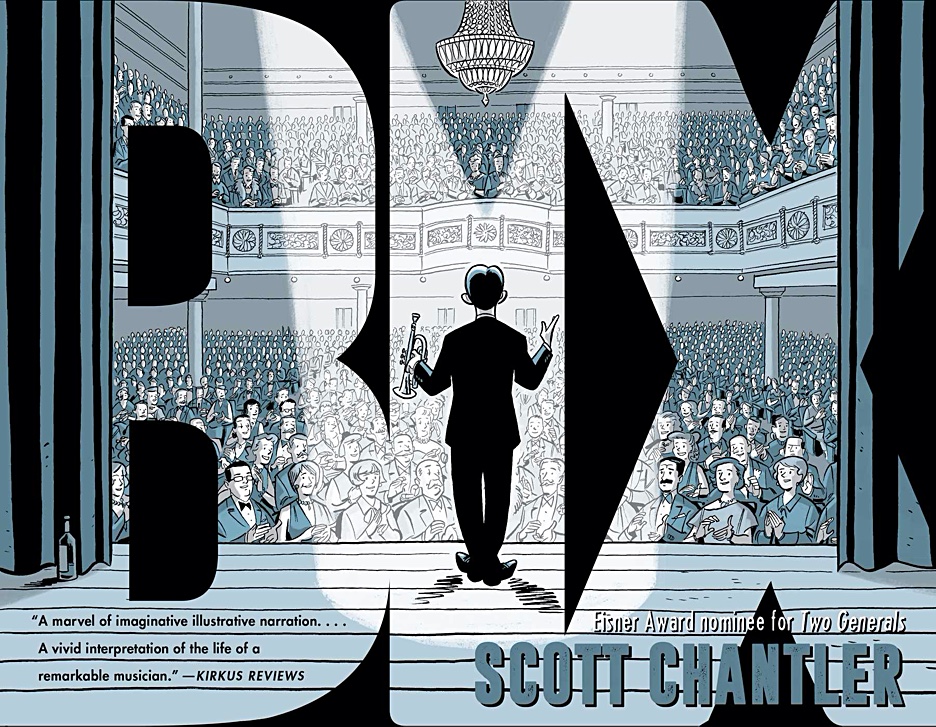 Leon Bismark "Bix" Beiderbecke's brief life has all of the hallmarks of a romantic legend. Wrote and recorded some of the landmark music in the early history of jazz; inspired a generation of soloists; overcame obstacles, including a lack of family support; died young after a brilliant career; and struggled with self-destructive impulses. Artist/writer Scott Chantler acknowledges all of this in his Introduction, along with the contradictory aspects of Bix's short biography. Bix is like an inkblot: people see what they want to see in him.

This is a graphic biography, and Chantler found his own path through the story, depicting scenes that may be apocryphal, combining characters, compressing and reordering events, and making his own judgements on the truthfulness of events (a disclaimer probably intended to head off historical arguments from die hard Bix fans). As he points out, these are all things that are regularly done when creating a readable story based on historical subjects. Bix was never very verbal, expressing himself mainly through music. So the story is nearly wordless, a rhythmic series of panels illustrating his story through a series of images, presented in black and white with gray and blue tones.

We begin with Bix's childhood in Davenport, Iowa. He displayed musical talent very early, attracting newspaper headlines from a public performance (on piano, his first instrument) at age seven. His older brother returned from military service in World War I with a gramophone and a collection of jazz albums. Bix quickly began to become attracted to jazz, moving from piano to cornet. And so the trouble began. He quickly lost interest in anything else, much to the consternation of his conservative parents. Poor grades led to his enrollment in a private college preparatory academy, which he was expelled from due to staying out all night playing music in nearby Chicago, and drinking (a problem which would haunt the rest of his life). After giving up on University of Iowa School of Music, Bix made a go at a professional musical career.

He meets saxophonist Frankie Trumbauer and they form an enduring partnership, playing together in the Jean Goldkette Orchestra and then the Paul Whiteman Orchestra (the leading dance band at the time). There is a revealing bit of personal life as well. Bix's relationship with Ruth is the only romantic one depicted. The only section with extensive dialog, it nonetheless shows the cornetist as a person who seems incapable of deep connections, reluctant to reveal much about his family history or inner life (except for music). Beiderbecke's attempts to limit his alcohol intake resulted in incidents of attacks of delirium tremens, which can include hallucinations: a terrific visual cue, which Chantler takes full advantage of.

Bix's death inspires a dreamlike series of panels in which highlights of his life alternate with his death in his apartment in Queens, New York: a literal "life flashing before his eyes" moment. Chantler's art is presented as an impressionistic sequence of horizontal panels throughout the book—the visual rhythm varying with the regularity of the narrative—but it takes on a special feeling here, visually portraying Bix's life fading away. It is a graphic representation of the final end of the misunderstood (and often self-destructive) artist, which has since become an iconic part of popular culture. Chantler's skill at telling this story almost entirely through pictures is a lesson in cartooning. Facial expressions and other non-verbal cues carry tremendous weight. Despite the almost complete lack of dialog, Bix Beiderbecke's story is clearly told.