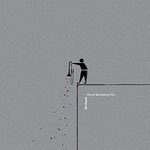 It's somewhat surprising that there aren't too many active trombone/bass/drums power trios around, with the model being strongly set in the late 1970s New York scene by such bands as BassDrumBone (trombonist Ray Anderson, drummer Gerry Hemingway, bassist Mark Helias) and the comparable, albeit freer group Brahma, with drummer Barry Altschul. The lack of current 'bone-heavy units is notable, especially given the resurgent appreciation for such architects on the instrument as Roswell Rudd, Grachan Moncur III, Albert Mangelsdorff and Paul Rutherford. With the vinyl-only release of Bit Heads, we can add Philadelphia-based trombonist Daniel Blacksberg to the short list of players chancing a trio stretch. Blacksberg is a player who has clearly done a lot of listening to his forebears—Mangelsdorff, Moncur, and George Lewis—as well as other brass instrumentalists who explore the wide point of extended technique. But what's notable is that, as an improviser, Blacksberg is far from showy, eschewing the rampant brashness of BassDrumBone and Brahma for a cooler, introspective detail and an easy egalitarianism with his trio mates (bassist John Barrios and drummer Mike Szekely).

"Fanfare for a Scrambled Race" opens the set with a crumpled dexterity, the foreshortened nature of Blacksberg's phrases recalling some of Moncur's late '60s free work (as on the piece "Exploration," from the 1969 BYG LP New Africa), as well as an incisive narrowness gleaned from a lineage of post-Don Cherry free trumpeters. The ballad "Just Shy of Hope" is wistful leaderless dusk, low-angled bass thrum and lackadaisical brush accents shading around the trombonist's drifting sighs and moans. A guttural, vocal snatch of bluesiness arises from the rhythm section's distracted patter and burble, drawn out into cutting lines that give the nod to a much older brass tradition. Metallic dabs from Szekely and Barrios' rubbery pizzicato are a perfect complement to the leader's waxy plunger exposition on "The Elastic Character," gutsy trio-logue in continual micro-bursts that culminate in buzzing multiphonics. All of the pieces here are fairly short, with only two much over the five minute mark, and there's not an extraordinary development of improvisational storytelling—indeed, the improvisations are more like vignettes of action, filled with presence and conversation rather than an overarching scheme.

That said, the two longer pieces do satisfy and the threesome gets into some heavy playing—"Combing the Post-Apocalypse" features some nasty whining arco bass, mirrored by throaty brass hum and extended linear blat, which slowly develops into an icily quixotic slink, supported by Szekely's knitted airy accents. The closing "Shot to the End" rides on surges of rattling energy, percussive shades of Sunny Murray and Sven-Ake Johansson propelling short swaggers and muted gnawing as the trio alternates between staccato detour and jumbled walk. Bit Heads is an impressive debut from a trio that espouses a dry and knotty playing field.

Fanfare For A Scrambled Race; Just Shy Of Hope; The Elastic Character; At Least Understanding; From the Chamber; Combing The Postapocalypse; Deforestation; The Closer; Shot To The End.