By Eyal Hareuveni
December 10, 2012
Sign in to view read count 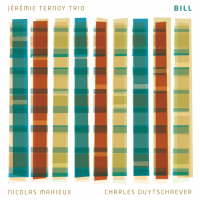 Bill is framed by eight pictures/compositions, each one sketching a clear pattern that sets its thematic development and scope of invention. Within these patterns, the compositions blossom organically, with great reserve and sensitivity, stressing their melodic core, the emphatic interplay and their suggestive storytelling.

But the trio's musical scope is much broader. "Le" possesses a delicate, poetic and concise melody that could be borrowed for an infectious pop song. The title track shifts between a gentle swinging pattern and a serene, chamber jazz atmosphere, highlighted with Mahieux's remarkable, short arco solo. "De" has a lyrical theme that is folded with methodical care and reserve; fragment after fragment, until it reaches its full beauty. Even the minimalistic and spare "Ligoté" keeps the same lyrical sense of flow and continuity.