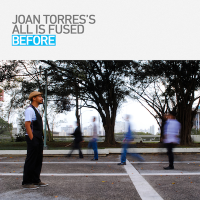 Fledgling musicians coming up in these accelerated techno times can benefit from pursuing individual projects without having to rely on major labels or other people to make decisions for them. Joining this crop of young lions is bassist Joan Torres, who is out to make it on his own terms with All is Fused, without ever relinquishing control or quality.

Having honed his skills through Boston's Berklee College of Music programs while studying and playing in Puerto Rico, it was inevitable that Torres would interact with likeminded musicians, leading to jams, gigs and, now, Before. Showcasing all-original material and recorded entirely in San Juan, it is evident that dedication to detail has achieved a terrific result.

From David Ojeda's piano intro on opening "Doorway," also featuring tasty guitarist Sergio Gonzalez, there is a sense that this music was approached on a personal level well beyond these players' collective years, and it just keeps getting better. The novel arrangements are acutely tight and defined by drummer Fernando Garcia, who sets a blistering pace on "Another World," and "True," where alto saxophonist Jonathan Suazo lays down a subtle backdrop to support his vivid solo. Suazo also shines on "Enlightenment," where he is joined by guitarist Gabriel Vicéns, displaying his exquisite tone and fluid playing.

As a leader and bassist, Torres has done an excellent job of producing, composing, arranging and selecting the accompanying musicians for this project. Though they are all obviously friends, it takes much more than that to produce a worthwhile record. There is the required talent, skill and dedication to the ensemble sound as a whole while not counting out individual efforts in the final outcome. There are many criteria involved in deciding to make music together; Torres and his band mates have, for all the right reasons, made it work, and Before is the harmonious proof.