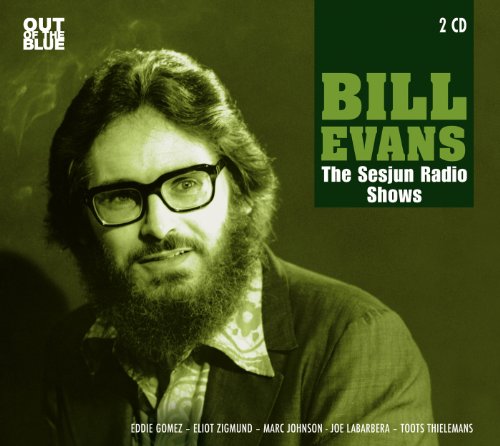 Pianist Bill Evans (b. 1929, d. 1980) changed the way of the piano trio, beginning with a handful of brilliant studio recording for Riverside Records in the late 1950s and early 1960s. A pair of live recordings for the label, Sunday at the Village Vanguard and Waltz for Debby, both released in 1961, cemented his reputation as a genius and agent of change.

Evan's pioneered a trio approach that favored more equality in instrumental input. In his late 1950s and early 1960s trio, it was bassist Scott LaFaro and drummer Paul Motian joining the pianist. La Faro's death in a car crash shortly after the recording of the two live albums resulted in a "what might have been" lament, but Evans forged on, releasing always good and sometimes great albums over the years with several different trios that never, in the minds of many, achieved the level of creativity and innovation of the Evans/La Faro/Motian team.

This perception may be, in part, true; once that innovative leap was made, nothing afterward seemed so daringly fresh. But building on the initial evolutionary leap, the best of Evans' later work sparkled with breathtaking beauty and unsurpassed harmonic depth melded to his exquisitely crisp, crystalline touch and adept feel for melodies perfectly suited to his style.

The Sesjun Radio Shows was recorded live for the Dutch Radio show, Tros Sesjun. The double CD set features late-period Evans in duo, trio and quartet dates. The duo tunes team Evans with bassist Eddie Gomez. Recorded in 1973, the telepathic intimacy between the two players was obvious as they covered familiar music from Evans' songbook, including "Time Remembered," "The Two Lonely People" and Leonard Bernstein's gorgeous and wistful "Some Other Time."

Drummer Eliot Zigmund joins the duo for some lesser known gems, including country/pop singer Bobbie Gentry's "Morning Glory," Evans' own "Twelve Tone Tune," and a beautifully gloomy rendition of band leader/trumpeter Mercer Ellington's "Blue Serge." At this time, Evans was in poor health, suffering from drug problems, but the music here doesn't suffer. His touch remained as succinct and precise as ever, and Gomez, with his assertive bass approach, was an especially fine foil for the pianist.

CD2 features Evans' last trio, with bassist Marc Johnson and drummer Joe La Barbera. They cover more familiar Evans fare, including Rodgers and Harts' "My Romance," the Evans-penned "Laurie" and Miles Davis' "Nardis," with an approach a bit more subdued and subtle than that of the Evans/Gomez/Zigmund trio, but every bit as enchanting, even though Evans' health had deteriorated further.

Harmonica player Toots Thielemans joins the trio for the last five tunes, beginning with "Blue in Green." Thielemans adds a folksy flavor to that most famous of Evans' tunes, that was first presented on trumpeter Davis' classic Kind of Blue (Columbia Records, 1959). The harmonica player's presence inspires the trio to an invigorated level of interplay on Paul Simon's "I Do It For Your Love" and on his own composition, "Bluesette."

The Sesjun Radio Shows, a recently uncovered treasure, ranks very near the top of late-period Bill Evans, alongside You Must Believe in Spring (Warner Brothers, 1983) and The Last Paris Concert, Edition One (Blue Note, 1983).

Tracks: CD1: Up With The Lark; Time Remembered; TTT (Twelve Tone Tune); The Two Lonely People; Some Other Time; Sugar Plum; Sareen Jurer; Morning Glory; TTTT (Twelve Tone Tune Two); Blue Serge. CD2: If You Could See Me Now; My Romance; Laurie; Nardis; Blue In Green; The Days Of Wine And Roses; I Do It For Your Love; Bluesette; Five.

CD1: Up With The Lark; Time Remembered; TTT (Twelve Tone Tune); The Two Lonely People; Some Other Time; Sugar Plum; Sareen Jurer; Morning Glory; TTTT (Twelve Tone Tune Two); Blue Serge. CD2: If You Could See Me Now; My Romance; Laurie; Nardis; Blue In Green; The Days Of Wine And Roses; I Do It For Your Love; Bluesette; Five.