By Dan McClenaghan
December 30, 2012
Sign in to view read count 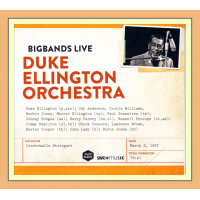 By 1967, the heyday of the big band was over. Rock and Roll ruled as the popular music of the day, and the financial challenges of keeping a large ensemble together for recording—and especially touring—were huge. But Duke Ellington—one of American's finest bandleaders, pianists, and composers—was more than just a genius in the field of music. He also succeeded as a business man, keeping his orchestra not only busy on the road, but also creating his finest art—what he called "American Music"—in the 1960s and 70s.

Big Bands Live: Duke Ellington Orchestra, is the second release from the Jazzhaus music label's "Big Bands Live" series, and it captures the group in top form in a previously unreleased 1967 concert recording in Stuttgart, Germany.

The fourteen-piece group opens with brief ride on the orchestra's theme, "Take the "A" Train," before launching into another Billy Strayhorn jewel, "Johnny Come Lately." Ellington sparkles on piano in front of John Lamb's walking bass, his spare elegance giving way to the orchestra that gathers momentum, sounding juiced up and full of fire as they feed off the enthusiastic audience.

The year 1967 saw the releases of a couple of extraordinary Ellington studio albums: ...and His Mother Called Him Bill (RCA ), and Far East Suite (Bluebird ); live and tearing it up, Big Bands Live: Duke Ellington Orchestra is a superb addition to this fertile period in Ellington's creative output.