By Doug Collette
December 30, 2012
Sign in to view read count
As with other Phish archive titles such as Chicago '94 (Jemp, 2012), The Palace of Auburn Hills December 6,1997 and Star Lake '98 offer more than mere comparison and contrast of musicianship: the download/two-CD set and DVD alternately accentuate and complement the band's current activities. And while both titles boast eye-catching graphics (the former eschews generic bootleg style for downright dazzling stage photos), neither title includes historical content to put the music within into some historical perspective for those outside the band's loyal community. Phish is clearly confident enough to let its music speak for itself and rightly so. 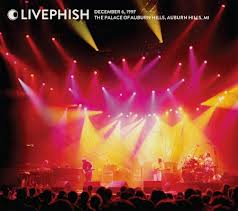 The immaculate recordings here, by Paul Languedoc , almost but not quite make recommendations for headphone listening irresistible for this December 6, 1997 release. Especially in regards to the non-stop second half of the appearance, the title reaffirms its hallowed status in Phish lore, as the first set is also a great example of the group's willingness to take chances with an unconventional approach to a show. So, after rushing from the gate via "Golgi Apparatus" and "Run Like An Antelope," a reversal of the usual dynamics the group employs, the foursome builds up speed during the first half, staking out the territory for later in the evening.

The instinctive abandon within the subsequent improvisations in the second set, through "Twist" and "Piper," may be far removed from the measured inspiration of so many post-2009 reunion shows, but the breathless momentum arising from the uncanny collective interplay, led by guitarist Trey Anastasio, is much the same. Thus, while the inclusion of Jimi Hendrix' "Izabella" might seem incongruous with the funkified likes of "Bathtub Gin," it's well to note the late guitar icon wrote this tune as he was delving into earthy musical realms himself, via post-Experience projects including Band of Gypsys (Capitol Records, 1970).

Taken from the video feed of this shed show, judicious touches such as close-ups of drummer Jon Fishman's footwork and stick work, not to mention artful superimpositions of guitarist Trey Anastasio, become bona fide highlights (and how far has Chris Kuroda's light work come in the near fifteen-year interim?). Phish's selection of covers remains notable today and may in fact have its most significant roots in the tour from which this DVD is taken. The quartet plays such tunes as Bob Marley's "Trenchtown Rock" (as show opener?!), Little Feat's "Time Loves a Hero" and Los Lobos' "When the Circus Comes to Town" as fans of the respective bands, so the lightheartedness Phish brings to such songs aids in maintaining a healthy detachment, as well as an emotional commitment to its own compositions, even those so slight as "Bittersweet Motel."

The choice of outside material also affects the logic of the set progressions, which here are markedly different than the cumulative momentum the band sustains during the LivePhish piece. The respective segues that conclude each disc of Star Lake '98 mirror each other as "Fee," into "Maze" followed by "Sample in a Jar," simultaneously accelerate and brake the momentum much like the combination of "Wilson" and "Golgi Apparatus." The end result is, perhaps, the ideal state of mind in which to leave Its audience, simultaneously satisfied and hungry for more.