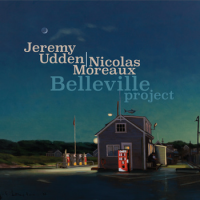 While housesitting in France, nascent American jazz saxophonist Jeremy Udden unsuspectingly connected with French bassist Nicolas Moreaux via social media, seeking musicians interested in playing a session. And while Udden has previously blended rock, folk and other genres into his repertoire, the twosome shared a joint interest in amalgamating the jazz vernacular with other idioms. Indeed, the sextet expresses good karma along with splashes of French romanticism and notable inferences toward Americana. Moreover, the program is garnished with the musicians' integration of pump organ, banjo and toy piano into the jazz schematic.

Udden and saxophonist Robert Stillman chant many of the disparate themes in unison, often rendering convivial soundscapes and downhome goodness, but alter the game-plan by skirting the free jazz zone during "Belleville." Other movements assert a down-homey, organic brew amid wistful harmonic riffs, drifting themes and lush phrasings. At times they delve deep into introspective musings evidenced on the laidback "11," honed down by guitarist Pierre Perchaud's strolling gait and topped off by the saxophonists' windswept voyages. And there are some off-kilter and laconic patterns, such as Moreaux's lighthearted toy piano voicings on the brief, folksy piece "Albert's Place." This is followed by another sub two-minute work and album closer "Healing Process," which is an up-tempo jazz vamp, driven home by drummer Pete Rende's hammering beats.

In sum, Belleville Project equates to a delightful listening experience, incited by the musicians' cleverly articulated incorporation of roots-centric instrumentation. However, the album includes some passages and tracks that are rather nondescript and detract from the conceivable greatness that could have been achieved.