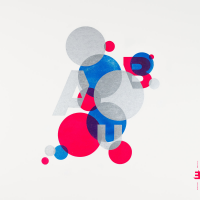 Twin-tenor frontlines are almost as old as jazz itself. Sonny Rollins and John Coltrane's meeting on the title track of Rollins' Tenor Madness (Prestige, 1956) may be the starting point for some listeners, but AAJers do not need reminding that the tradition was popular in live performances as far back the 1920s. Later, with the arrival of LPs, multi-chorus chases became possible on record—a case of technology catching up with artistic practice rather than, as has been the norm in the digital era, enabling it.

The tradition continues to thrive in 2020, with a few tweaks. In March, the Eric Alexander and Seamus Blake co-led New York All-Stars released the steaming hard-bop celebration Live Encounter (Ubuntu Music), which had an appropriately competitive shave-your-ass edge. Two months later, a pair of younger players offer a more modern spin on AuB, in which the cutting-contest vibe is replaced by a more collaborative approach.

AuB is a quartet made up of four highly-rated young British players: tenors Alex Hitchcock and Tom Barford, double bassist Fergus Ireland and drummer James Maddren. Hitchcock and Barford have each released well-received studio albums—Hitchcock with All Good Things (Fresh Sound New Talent, 2019), Barford with Bloomer (Edition, 2018)—but AuB is their twin-tenors debut. They split the composing credits equally down the middle, writing four tracks each. A little of what used to be known as "sweetening" fills out the sound palette, with the string section that in the analogue age provided the sweetening replaced by synthesizers played by Hitchcock, Barford and Ireland. Fair enough, even Rollins and Coltrane had the rococo-inclined pianist Red Garland on hand for their summit meeting.

While the visceral thrill of hearing two tenors locked in gladiatorial combat is not part of AuB, there is plenty to engage with. The rhythm section is tough, the material is engaging, and, above all, Hitchcock and Barford's solos are full of surprising twists and turns. Both players have bright futures, together and separately.