Stan Getz: At The Shrine 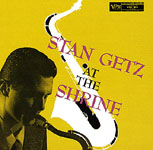 This latest reissue in the Verve Originals series—which in early 2009 brought us the superb five-CD box set Stan Getz: The Bossa Nova Albums—tends to be overlooked when lists of tenor saxophonist Stan Getz's early classics are compiled. A 1954 live recording from The Shrine in Los Angeles, it was originally released on Norman Granz's Norgran label over two LPs. This CD release includes in its entirety a 53-minute concert set by the Getz quintet plus another 17 minutes recorded the following evening, with drummer Art Mardigan replaced for contractual reasons by Frank Isola.

Those last four words pretty much sum up At The Shrine. Getz and Brookmeyer solo with exquisite, muscular fecundity—as, less frequently, does pianist John Williams—and in their shared thematic statements and dual-improvisations attain levels of spontaneous interplay reminiscent of early New Orleans bands, yet on harmonically more complex material. The tunes are straight out of the top drawer, including strong originals by Brookmeyer ("Open Country"), Johnny Mandel ("Pernod") and Al Cohn (the funky "Tasty Pudding," previously recorded by trumpeter Miles Davis), some classy standards (including exquisite readings of "Flamingo" and "Lover Man"), and two tunes associated with Duke Ellington.

It's Ellington (who appeared with his orchestra at the same gig) who is heard introducing the Getz quintet at the start of the album, referring to him as "a leading exponent of the cool school." That he certainly was, but as At The Shrine so vividly reminds us, Getz, like alto saxophonist Art Pepper, brought a degree of passionate engagement to his music that isn't stereotypically associated with cool or so-called West Coast jazz. (None of the band members originated from the Coast, and the band itself was formed in New York. Indeed, it might flippantly be observed that the fact that Getz had been busted in Seattle was one of its few qualifications for the label).

It's a shame that this re-issue doesn't use the cover image—ringingly evocative of its era—of a tenor saxophonist painted by David Stone Martin, used on the album's original Norgran release (and its first appearance on CD in 1992), but instead the artwork from a later Verve LP reissue. But that's a minor point. The music is what matters, and At The Shrine deserves to be heard by every jazz aficionado.