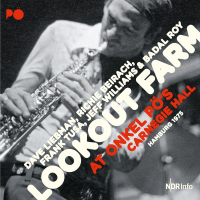 Fasten your seat belt, please. Dave Liebman and Richie Beirach's club date with Lookout Farm barely lets up during an hour of ferocious jazz going on jazz-rock. It's in roughly the same bag as Miles Davis' post-Bitches Brew (CBS, 1970) electric albums, some of which had Liebman in the lineup. The tape lay in the vaults of German radio station NDR, for whom it was recorded for broadcast in 1975, until its rediscovery by Jazzline Records. It forms part of the label's high-calibre series of archive recordings made at the famously louche Uncle Po's Carnegie Hall in Hamburg during the 1970s and 1980s.

Live At Uncle Po's Carnegie Hall: Hamburg 1975 follows Lookout Farm's eponymous 1973 debut on ECM. The ECM album was made during Liebman's four-year tenure with Davis; this Jazzline release came shortly after he left to pursue his own career. The group includes a second Davis alumnus in percussionist Badal Roy.

Lookout Farm was a nominally collective affair, focused on group improvisation, but its stars were undoubtedly Beirach and Liebman. Beirach attacks the electric piano with an intensity rarely matched by any of the keyboard players in Davis' contemporaneous bands, though not, it must be said, with the melodic invention possessed by Davis sidemen Herbie Hancock, Joe Zawinul, Chick Corea or Keith Jarrett. Electric bassist Frank Tusa and drummer Jeff Williams turn the dial up to eleven and mostly keep it there, and Badal Roy struggles to make himself heard during the tumult (adding some nice grooves when he succeeds).

ADVERTISEMENT
Three of the five tracks are Liebman originals. "Your Lady" is by John Coltrane; in this incarnation she proves to be more of a riot grrrl. "I'm A Fool To Want You" is by Frank Sinatra, Jack Wolf and Joel Herron. Lookout Farm's reading is on a different planet to better known ones by Sinatra, Billie Holiday and Chet Baker.

Badal's cloistering aside, audio quality is superb, close to studio standards, and audience applause, though enthusiastic, is not allowed to intrude.

After the break-up of Lookout Farm, Liebman and Beirach continued their relationship in the longer-lived band Quest and on a series of collaborative albums. They still record together. Please keep your seat belt fastened.

Track Listing: Naponoch; The Iguana’s Ritual; I’m A Fool To Want You; Your Lady; Fireflies.