It's all about guitars on this show with fantastic new albums featuring six strings. Thumbscrew return with their sixth album and Mary Halvorson is continually inventive with her approach to the instrument in a jazz context. There's also a debut from Mike Freedman, ground breaking sounds from Johnathan Kane and Dave Soldier, and the New York sounds of Justin Rothberg. Reza Khan, also with a sixth album, delivers a great new set of tunes, while Charlie Apicella interprets classic jazz ...

There are more 2020 favourites scattered throughout this playlist (my choices at the One Man's Jazz website), but some excellent new trio and duo releases are highlights. Ben Monder, Tony Malaby and Tom Rainey gathered at one of Monder's residency-sessions at the 55 Bar and the three-part album is split over this show and the next two. The explosive Austrian trio Interzone, led by trumpeter Mario Rom, celebrate their tenth year as a group with Eternal Fiction, while Finnish saxophonist ...

Monash University in jny: Melbourne, Australia is the home of the Sir Zelman Cowen School Of Music. It's an excellent program that believes in challenging the students. One of the ways it does that is to bring in internationally recognized artists to perform and work directly with the students. This episode presents some of those Monash sessions. Guitarist Ben Monder and trumpeter Ralph Alessi traveled from the USA while Sydney's acclaimed saxophonist Sandy Evans joined her friend, the much praised ...

On Day After Day, Ben Monder explores memories triggered by songs. Over two discs, one solo and the other with bassist Matt Brewer and drummer Ted Poor, the guitarist rouses impressions formed long ago. Just like a certain fragrance can spark the memory of an old lover, songs deep in your brain's hard drive can be recovered. Miles Davis and Sonny Rollins were masters at this, but covering Rodgers and Hammerstein's “The Surrey with the Fringe on Top" from the ...

Rare is the musician who remains static throughout their career, and with his professional life dating back to the mid-1990s, Ben Monder has had time enough to change course when the desire strikes. Since his outstanding debut, Flux (Songlines, 1995), he has released a handful of equally impressive albums which follow in its footsteps, as well as infrequent collaborations with vocalist Theo Bleckman. He was also selected to play guitar on David Bowie's final album. Having wanted for years to ...

read more
81
Catching Up With

Ben Monder is a guitarist with a singular and influential voice. While he has received a great acclaim for his multifaceted work and unparalleled technical facility, Monder has also demonstrated remarkable breadth both as a bandleader and composer. His debut album for ECM Amorphae is a kind of a movie for one's ears. Amorphae consists of a set of beautiful compositions that orchestrate kind of sounds beyond the imagination. Monder's distinctive guitars create a wide range of colors, dynamics and ... 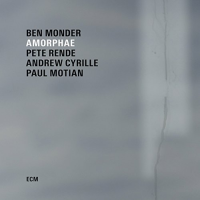 Having made his first--and, up to now, only--appearance on Munich's lauded ECM Records on the late drummer Paul Motian's Garden of Eden (2006), it's certainly taken a long time for the virtuosically talented guitarist to get a date of his own. Monder's résumé--while filled with significant associations including, in addition to Motian, composer/bandleader Maria Schneider, double bassist and occasional ECM label mate Marc Johnson, saxophonist Donny McCaslin (with whom Monder will also appear on the upcoming Black Star by David ...