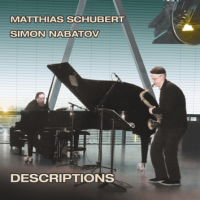 Descriptions marks the initial alliance of venerable European improvisers, tenor saxophonist Matthias Schubert and pianist Simon Nabatov. Recorded live at a venue in Cologne, Germany, the musicians plan their modalities on descriptive nouns, which is an interesting proposition that tenders food for thought on a per-track basis. They mold song forms based on ephemeral or lengthy interpretations of a descriptive word. Nonetheless, the program is a composite of penetrating and forward-looking dialogues complete with asymmetrical sensibilities framed on introspection, oscillating ... 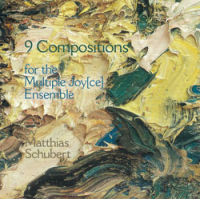 Featuring an international cast, Matthias Schubert conducts a program that snugly resides in the avant-garde space. Each track is outlined in the liners, citing connotations, inspirations and homages, where it's up to the listener to connect the dots via his or her interpretations. It's a hybrid offering engineered with asymmetrical parts of classical, jazz improvisation, John Cage-like indeterminacy and neo-minimalism. “Conlon Zoubeck" features pianist Phillip Zoubeck's off- center manipulations that could be categorized as a song-form designed on ...

In the heady climate of the 1970s loft jazz era, the fertile aesthetic common ground shared by Dixieland and free jazz was well documented by such notable innovators as Henry Threadgill, Anthony Braxton, Muhal Richard Abrams and the Art Ensemble of Chicago. German tenor saxophonist Matthias Schubert continues this exploration on Trappola.

Schubert and the other members of his group--clarinetist Claudio Puntin, tuba player Carl Ludwig Hubsch and drummer Tom Rainey--share common histories, having often played together in various combinations ...