It is odd that Rebecca DuMaine should have chosen “Alone Again (Naturally)" to decorate a pandemic-influenced recording. Quite a few musicians have, almost perforce, referred to the circumstances of the Covid months, but this song can be oddly compelling for someone who remembers the contrasting emotional environment in which it was recorded in 1972. It was about personal loss, and powerfully so, but certainly not about widespread disappearances, a modern version of a plague year. DuMaine's matter-of-fact delivery here is ... 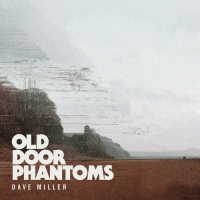 Guitarist Dave Miller has been all over the jazz, rock and improvisational map, performing with the progressive rock band Algernon and stints with Ted Sirota's Rebel Souls amid collaborations with many artists for numerous record labels. However, Old Door Phantoms is Miller's his first solo outing, where he draws upon numerous jazz, pop and rock influences. It's an explosive set recorded at famed producer Steve Albini's Chicago studio, Electrical Audio. According to the press release, [the audio] “has ...