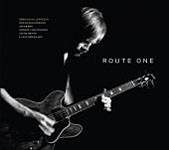 The new wave of Danish jazz has brought several guitarists into the public eye, among them, Jakob Bro, Mark Solborg, and Mikkel Ploug. However, a somewhat underexposed talent on the Danish jazz scene is Søren Dahl Jeppesen. His graceful, lyrical tone and abilities as a composer have benefitted the ambient chamber jazz of the group Pauseland.

Route One is Jeppesen's first album as a leader, and it finds him doing what he does best: creating subtle musical moods and simple, ...