The Bad Plus Bijou Theatre From Big Ears, Part 2 Knoxville, TN December 4, 2020 The Bad Plus kicked off the virtual concert series “Sites & Sounds from Big Ears" with their October 9th concert streamed from Knoxville's historic Bijou Theatre. This second installment began with a point of view shot walking down S. Gay Street to the theater entrance, through the glamorous Art Deco lobby (which surely will trigger a twinge of recognition ...

This is the 97th of 100 programs in the Jazz at 100 series. We move now into the 21st century, presenting music from less than twenty years ago. Which of these performances will have lasting value? What players will be remembered for their contributions to advancing the music? What trends will turn into dominant themes? The more recent the music, the more difficult it is to tell with any certainty. As mentioned in the last two hours of ...

Atlanta Jazz Festival Atlanta, GA May 26-27, 2018 The Atlanta Jazz Festival prides itself on being one of the largest free jazz festivals in the United States. The 41st edition took place under a forbidding forecast of heavy rainstorms: the event announcements made a big point of stating that the festival was a “rain or shine" event. In the end the weather largely held--with the exception of a couple of brief showers on Saturday afternoon--and if ...

The Bad Plus: Never Stop II 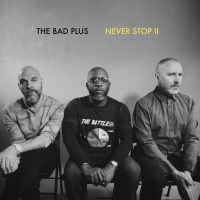 Armed with a new pianist and eight solid original tunes (plus two original bonus tracks), The Bad Plus prove that being a working, cohesive band is what's most important to them. Their 13th album, Never Stop II, sees a triumphant return of the seasoned piano trio, after the relatively graceful departure of their long-time pianist Ethan Iverson and their less graceful previous album, It's Hard (Okeh/Sony Masterworks, 2016), of all cover songs. On the Never Stop II, The ...

The Bad Plus & Joshua Redman at the Michigan Theater

The Bad Plus & Joshua Redman The Michigan Theater Ann Arbor, Michigan April 23, 2016 Over the course of some twenty years, The Bad Plus has honed its own brand of music making, tapping into a plethora of styles and grooves to develop their own musical hybrid. Pianist Ethan Iverson, bassist Reid Anderson, and drummer Dave King know how to push the envelope with their repertoire of original material and crafty alterations of material ranging ...

The Bad Plus: The Rite Of Spring 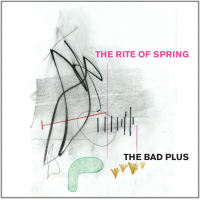 Calculation and risk, bombast and glory, a complete shunning of expectations, and a penchant for the provocative, percussive and dramatic. It's hard to know if that description is meant to be applied to Igor Stravinsky's most heralded work or the collectively-operated trio known as The Bad Plus; it's hard to make that distinction because it rings true for both. One hundred years separate the premiere of The Rite Of Spring, which caused a riot, and the recording ...

The Bad PlusFlynn Center for the Performing Arts Burlington VTFebruary 16, 2013The Bad Plus' appearance on The Flynn Mainstage illustrated how much progress the trio's made since earlier appearances in the much smaller FlynnSpace. The surprising number of empty seats as the evening progressed hinted the performance bordered on the underwhelming, but that was a passing sensation as the concert progressed.The trio's half-hour jaunt through Stravinsky's “Rite of Spring," though ostensibly the feature ...