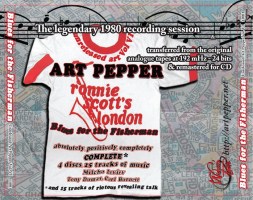 Blues for the Fisherman

Laurie Pepper has been the lightning rod for the music of her late husband, Art Pepper, since the saxophonist's death at 56 in 1982. She took proper control of his musical legacy in 1981 on the advice of the couple's accountant, transferring ownership of the saxophonist's works and contracts to the entity Arthur Pepper Music Inc., where, as intellectual assets, the corpus was protected from outside encroachment.

This series grows by one with the release of the four-disc Unreleased Art, Vol. VI—Blues for the Fisherman, providing, for the first time, Pepper's complete two- night appearance at Ronnie Scott's London, June 27 and 28, 1980. The history of these recordings rates an article itself. These sides were recorded by the owners of the local Mole Jazz Record Store, who were intent on starting their own recording label with with Art Pepper performances. Pepper's contract with Galaxy records prevented this music from being released under Pepper's name and further disallowed the release of any Pepper compositions previously recorded by Galaxy. Ultimately those performances able to be released were provided under pianist Milcho Leviev's name, Blues for the Fisherman (Mole, 1980) and True Blues (Mole, 1981). Not until now has the entire two evenings' four sets of music been released, making this a most important addition to the Art Pepper discography.

The four sets recorded over two evenings reflect Pepper's late period aesthetic of kicking things off with a mid- to up-tempo blues, typically introduced by an alto flourish followed by a driving walk in the double bass. These sets are no exception. All originals: "Blues for Blanche," "True Blues" and the twice played "Untitled #34" demonstrate, in microcosmal fashion, Pepper's compositional and performance paradoxes, his coexistent selfishness and generosity. Late in his life, Pepper preferred the quartet format over those implying a second horn. This was his prerogative. Like Beethoven, Pepper believed himself an artist and afforded himself that luxury. He wrote difficult and challenging charts and expected much from his sidemen. He rewarded them with praise and plenty of solo time. The result was this music.

Pepper's quartets with pianist Milcho Leviev were taut affairs driven by a not-quite- congruent meeting of two musical philosophies. Pepper, deep and earthy played a foil to Leviev's Eastern European classical approach. The results were always compelling if not transcendent. Both evenings featured Pepper's sublime ballad "Ophelia" and funky, R&B-saturated "Make a List." These are pieces closely associated with the saxophonist and two of his favorite improvisatory vehicles late in his performing career. "Make a List" proved beyond doubt that Pepper was capable of the most dirt-level organic playing and while these performances are excellent, they would be bettered to the point of definition on The Croydon Concert.

Pepper's first instrument was the clarinet, one he was more than capable of playing but left for the more glamorous alto saxophone. The clarinet also inspired a certain degree of controversy and anxiety in Pepper and those around him. Pepper's most notable clarinet performance was on Charlie Parker and Dizzy Gillespie's "Anthropology" originally released on the saxophonist's superb 1959 recording Art Pepper + Eleven Plays Modern Jazz Classics. He performs "Anthropology" here with the preface that he did not often perform on clarinet. While this might be true, Pepper performed a searing version at the Village Vanguard in 1977 with bassist George Mraz playing a tight duet with the saxophonist. Where Pepper played an alto interlude at Ronnie Scott's, he played the rare tenor saxophone performance at the Vanguard. For all of his talk, "Anthropology" on clarinet, was always a treat.

Another blues Pepper played both nights was "Red Car" from Pepper's early comeback recording The Trip (Galaxy, 1976). Like "Make a List," "Red Car" revealed a heavy R&B-soul jazz element to his playing that proved him superior to David Sanborn and the like. Here, it sounds as if Pepper is having fun, turning out a rocking performance, something different than his typical hyper-emotional performance. Pepper was always fond of staid ballad's such as "Over the Rainbow" and "Goodbye." For his Ronnie Scott's dates, Pepper chose the latter and proceeded to show how nakedly and vulnerable he could play. Searing and corrosive, Pepper's ballads had no contemporary peer and certainly none today.

Having sworn to never play clarinet again, Pepper dished out a spry "In a Mellow Tone," a song he would reprise with his favorite pianist, George Cables, on his famous duet recording Going Home (Galaxy, 1982), his next to last studio release. Here he duets with bassist Tony Dumas to rousing acclaim. Pepper closes this two-week stay at Ronnie Scott's with the original "Blues for the Fisherman," whose title deserves the story in Laurie Pepper's liner notes. Originally released on Leviev's album by the same name, one reviewer commented that "Blues for the Fisherman" was "the twelve bars of the decade." So spare and fundamental is Pepper's approach—such as that on "Thank You Blues" from Art Lives: The Maiden Voyage Sessions, Volume 2 (Galaxy, 1981)—that all jazz sensibility is stripped out leaving only the blues in its most elemental ensemble form.

Elemental form...that is what Art Pepper was in for these performances. Halfway through his celebrated comeback, Pepper knew that his time was short and he took advantage of that time to make jazz that completely transcended his cool California roots, defining what the "jazz life" is all about. Blues for the Fisherman is a most important and essential set to the understanding of jazz, art, and how difficult it is the achieve the sublime.