By C. MICHAEL BAILEY
March 24, 2015
Sign in to view read count
Alto Saxophonist Arthur Edward Pepper, Jr. (1925-1982) wanted to be known as the "greatest alto saxophonist in the world," a tall order considering contemporaries like Charlie Parker, Johnny Hodges, and Paul Desmond. In spite of this, Pepper outlived all of them while forging a unique and personal sound. Pepper, along with Desmond and Lee Konitz, were among the few small-combo saxophonists able to forge an individual sound despite the long shadow of Bird.

Early, 1950 to 1960—The Early Show marked Pepper's first recording as leader. This period included his affiliation with Savoy, Blue Note, and Contemporary Records. It saw the release of the truly legendary recordings Art Pepper Meets The Rhythm Section and Art Pepper + Eleven: Modern Jazz Classics. Pepper's early tone was cool, dry-ice with impeccable intonation and vibrato. Early Art ended with Pepper walking out of the Contemporary recording studio November 25, 1960 and preparing for an extended prison stay. That recording session resulted in Intensity and it would be some 15 years before Pepper would lead a combo in the studio again.

Middle, 1960 to 1975—A mostly musical fallow period characterized by Pepper's multiple prison and drug rehabilitation stays. There was some notable biodiscographics to consider. Pepper's playing had come under the spell of John Coltrane, an influence heard in abundance on the horribly recorded Art Pepper Quartet Live in San Francisco, 1964 and the recently released Renascence, recorded live 1975. Pepper's tone began to fray, betraying the naked emotion he would emit from his horn during the end of his life.

Late, 1975 to 1982—The Götterdammerung of the Jazz life, Pepper is fully reconstructed and infinitely impassioned. He released Living Legend in 1975, beginning a string of excellent recordings that included The Trip, No Limit, and his famous first East Coast recordings at the Village Vanguard. Pepper's later career was marked by a switch to Galaxy Records where he produced his famous Maiden Voyage Sessions, his strings recording, Winter Moon and his final duets with his favorite pianist George Cables, Goin' Home and Tête-à-Tête.

Art Pepper's tone and performance at his life's end were devastating-both to him and his fans. He concluded his life as the World's Greatest Alto Saxophonist.

Completely flawed in assembly and annotation, Surf Ride is nevertheless the superb example of the young Pepper in full bloom. A perfect juxtaposition to Roadgame.

Fueled by smart Marty Paich arrangements, Pepper and his West Coast companions perform a dozen modern jazz classics in their own image—beautiful, brilliant, and dangerous. "Walkin'" on the clarinet. 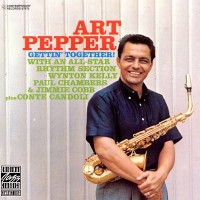 Again with Miles's rhythm section, but from the Kind of Blue combo (Wynton Kelly, Paul Chambers, Jimmy Cobb). Conte Candoli adds his brass for an octet of tunes crowned by the bassist's "Whims of Chambers."

Recorded in between court dates and prison, the listener would never know the turmoil of Pepper's life. Jack Sheldon joins in front and Pepper extends with Ornette Coleman's "Tears Inside."

Completed shortly before a 15-year absence from performing and recording, Intensity displays Pepper's indistinguishable spirit. "Autumn Leaves" and "Come Rain or Come Shine" say it all. 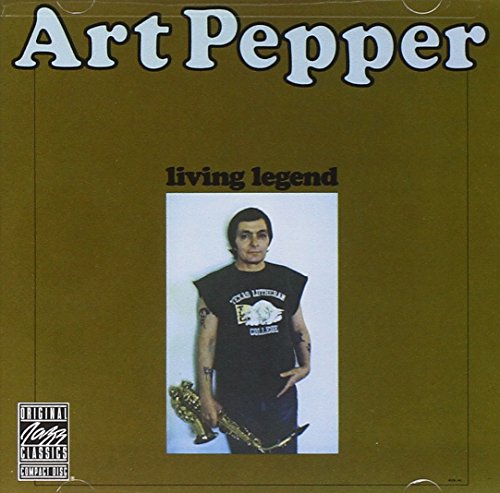 What a long, strange trip it's been. This is not the same Art Pepper of the 1950s, quiet and well-behaved. This is Art Pepper in anger therapy, wailing from the analysis couch.

One of the finest of all "with strings" offerings. Pepper is aided in his vision by exquisite Bill Holman and Jimmy Bonds arrangements and an eclectic and intelligent choice of material. "The Prisoner" (from The Eyes of Laura Mars) will leave you speechless.

Art Pepper at the Maiden Voyage Club was more fully realized in his vision that he was four years earlier at the Village Vanguard. Pepper soars on these sides in the company of perhaps his greatest working quartet. 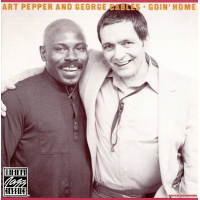 A musical love affair with his favorite pianist, George Cables. Like "with strings" recordings, many horn players like to make duet albums. Goin' Home is a fine one, along with her sister, Tête-à-Tête.

For the listener who wants much, much more...

Art Pepper at his ragged best in 1977. With superb accompaniment by George Cables, George Mraz, and Elvin Jones, Art Pepper defined his later career with these corrosive performances.

Just when the Art Pepper enthusiast thought there was no more, Galaxy acquires all of Pepper's Atlas sides made as an ostensible sideman while under contract with Galaxy. A relaxed and brilliant Pepper, here he is not driven, only dedicated. 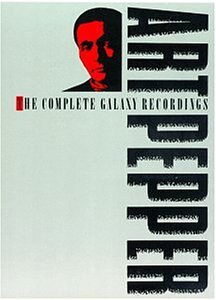 The Complete Galaxy Recordings was a monumental undertaking resulting in a musical monument. Sixteen discs of the great altoist in twilight.