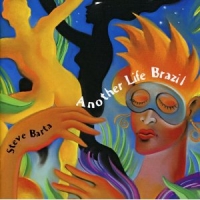 Pianist Steve Barta continues his musical travels through Brazil that started with Blue River (Source Music, 2001), a collaboration with flautist Herbie Mann. Mann joined Barta on Another Life Brazil, performing his valedictory on the title tune shortly before his death at 73, in 2003. None other than Hubert Laws rounds out the wind parts on Another Life Brazil, but it is Mann's contribution that is the most compelling among an otherwise excellent Latin project.

"Another Life Brazil" was composed and sung by frequent Barta collaborator Lee Trees. The piece is dry and breezy, like the Caribbean breathing into Rio. Mann's support is warm and exact, melding well with Trees' assertive and confident voice. Barta steers the festivities as if sailing on a rich Mojito to the promised land. Barta and company remain confident and durable interpreters of Brazilian fare, and Another Life Brazil is excellent and compelling evidence.