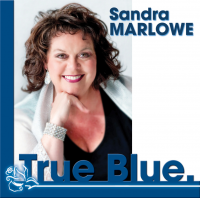 With the plethora of female jazz vocalist turning out new albums almost weekly, it is refreshing to hear an exceptional voice—a diamond in the rough—from a singer whose time has finally come to share her enormous talents with the rest of the world. San Francisco Bay Area native Sandra Marlowe proves she is no ordinary singer, and one sampling of True Blue begs the question: Where has she been? A rare voice capable of caressing the lyrics and reaching high notes with ease, Marlowe makes quite an impression voicing oft recorded standards from The Great American Songbook and more on this debut, revealing a certain vocal charm with grace and elegance on each memorable rendition.

Pianist, co-producer and arranger Larry Dunlap has assembled an A-list of Bay Area musicians for this endeavor using a core trio of Dunlap, bassist John Shifflett and drummer Jason Lewis on every song and augmenting the group on various tracks with trombone, saxophones and trumpet solos in the context of a light ensemble setting. In fact, the first example of this is heard on Cole Porter's opening standard, "I Concentrate on You," where Marlowe's high-reaching vocals are accompanied by trombonist Jeff Cressman and reed man Charlie McCarthy on flute.

Marlowe possesses a voice well-suited for mellow ballads and tender standards and demonstrates it often, beginning with a warm performance of the sensitive "Black Coffee" and "Autumn Leaves/There's No You" medley—two pieces enjoying the trumpet voice of John Worley. There's more light stuff on the beautiful "Love Dance," featuring Dunlap on electric piano, while the singer and band turn to a bit of swing on Fats Waller's classic "Honeysuckle Rose," as well as on a terrific lively version of "The Song Is You," where Marlowe belts out the lyrics in one of the disc's stronger performances.

Marlowe displays her softer side, singing with emotion on tender treatments of "More Than You Know," the "Lonely House/With Every Breath I Take" medley, pianist Chick Corea's" "Spain" and the finale, "Those Eyes." Make no mistake about Marlowe; she is a serious quality singer with an exceptional voice captured well on this sparkling first effort. If the exciting True Blue were a concert instead of an album, there's no question that this vocalist would have brought the house down with her powerful performance.

I Concentrate On You; Black Coffee; Autumn Leaves/There's No You; Love Dance; Honeysuckle Rose; A Sunday Kind Of Love; The Song Is You; More Than You Know; You Don't Love Me; Lonely House/With Every Breath I Take; Spain; Those Eyes.