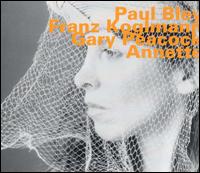 Those familiar with the music of Paul Bley, as well as Annette Peacock—after whom this album is named, and whose compositions are featured—will recall the nervy sense of creativity that flowed through their veins and music. In fact, the manner in which Peacock's work is described also fits Bley; both play music that is austere, exacting, somewhat laconic, minimalist and always wildly individual, which is what makes it so sensual, singular and utterly memorable. And while Bley's music has always been instrumental in nature, Peacock's was defined not just by the primal highs and lows of her voice, but also by the nakedness of her lyrics; the soft scream of her poetry that propelled her songs. So to find her music played here without words is both a surprise and a big challenge.

The slashing experimentalism of that music was, however, almost certainly an invention of Bley's as much as it was Peacock's. They were husband and wife during the time most of this music was composed and recorded, though they were not even remotely connected when this album was made in 1992. So Bley 's remarkable intimacy in interpreting these songs instrumentally is astounding, notwithstanding his being ably abetted by another of Peacock's ex-husbands, bassist, Gary Peacock, who brings his robust melodism to this date as well. To complete the trio, which surreptitiously inhabit Peacock's bitter oeuvre is Franz Koglmann, credited with originating the idea before he took some charts to Bley, who was in the unique position of making, just five months prior to this album, another record featuring the music of his another significant ex-other, Carla Bley, on Plays Carla, (SteepleChase, 1992).

Deeply influenced by the early psychedelic era as well as elements of the Way of Zen, Annette Peacock composed works that were characterized as much by hypnotic whorls as by the use of silence and harmonic space between phrases and lines. Right from the early mid-sixties, when Peacock joined Albert Ayler, her earliest work was marked by an invention all her own, an idiom that she called "free-form song." One of these is the miraculously beautiful, "Albert's Love Theme," which she composed to mark her devoted friendship with the great saxophonist. Her songs were designed for sound and silence, a sonic architecture that she continues to work with to this day, as even her most recent work shows.

Bley remains true to Peacock's stylistic idiosyncrasies throughout this album. His heart-wrenching performances of "Touching" and "Blood" cast Peacock as a musical doppelganger of author Sylvia Plath. Peacock's originals possess stripped down emotions that bare her soul, and Bley's versions emanate directly from his artistic soul. His astounding work is matched, note-for-note by the ingenious soul-searching minimalism of Peacock's sinewy pizzicato playing, as well as the lonesome, electrifying beauty of Koglmann's trumpet and flugelhorn, capturing Peacock's sensibilities ever so accurately, especially on Miracles." Small wonder this album remains as fresh 18 years on as it was when it was originally released.