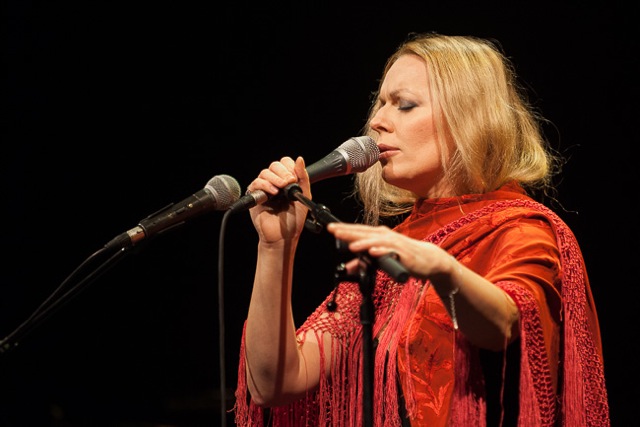 Any time Anna Maria Jopek makes an appearance in Western European locations, she can count on Polish ex-pats from the neighboring areas to turn out, en masse, for engaging versions of traditional anthems.

That's what happened again tonight as hundreds of high- energy devotees headed into this charming, near-central Netherlands town. The concert was a special feature of the annual Jazzy Tiel festival that occurs throughout various smaller bar/restaurant-type settings, running this year from October 28th to November 3rd.

Jopek and an exceptional supporting quintet provided a joyous homecoming soundtrack for a large gathering, more than a few softly singing along to her typical mix of tunes that feature regional standards and originals.

Jopek remains quite stylish in her homeland. There was a large, fashionable Polska patriot demographic in attendance, one not apparent around here since Jopek shared a spotlight with countryman Tomasz Stanko during the nearby 2009 Düsseldorf Jazz Rally.

The gala event resembled a casual embassy shindig. Many in the assembled swarm smiled and swayed, waving small, illuminated toy roses that lit up for a nice visual response that made Jopek and her colleagues beam broad smiles.

Jopek worked in her usual style with dual microphones, creating distinctly vibrant tonal textures or subtle, suggestively nuanced delays. Her distinguished voice is probably powerful enough that amplification may not even have been required to reach the furthest seats. Either way, her voice was loud and clear.

The set began as Jopek harmonized with classically trained pianist Krzysztof Herdzin and Marek Napiorkowski on guitar. The frequently collaborating trio on stage at that point would have been a worthy show in itself. As the rest of the group (Robert Kubiszyn/bass, Cezary Konrad/drums and Pietr Nazaruk/flute, dulcimer) joined in, the audience sat back, more and more comfortably, while Jopek seemingly hypnotized many. 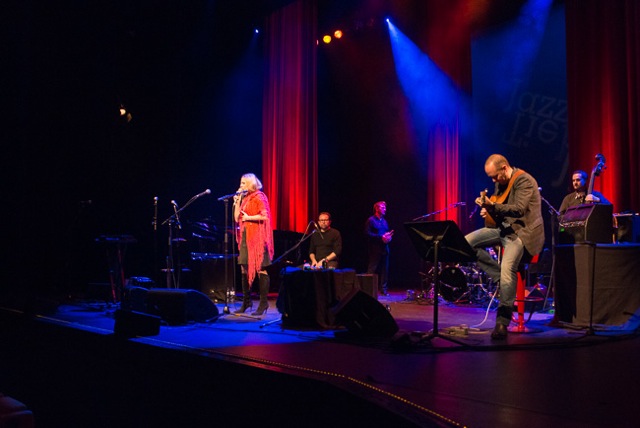 After a few early, minor technical adjustments, the full band connected. By their second song, they were all in precise harmony. Herdzin and Nazaruk provided excellent primary backing vocals throughout the evening.

The nearly two hour show was entirely in Polish, a native tongue for many in the hall. With Jopek's stunning range and thoughtfully scaled application, the essence of various love songs got through most of the time whether you spoke the language or not.

As Jopek read from a cue card to sing a Dutch introduction that went over well with the locals, it proved she could probably sing just about any printed material and make it sound sensuous.

A sizable segment of the show centered on mildly improvised interpretations of the traditional songs covered on Polanna (Jopek Music, 2011).

A mix of modified versions of earlier album compositions demonstrated her keen ability to both create and embellish gently moving phrases/portraits, both musically and vocally. Jopek included outstanding tunes from Upogenie (Nonesuch, 2008), her fine collaboration with Pat Metheny.

Tonight, guitarist Napiorkowski was a multi-stringed force in his own right, and stood out among an outstanding team. The hall's excellent tones aided his quick fingered cause.

The band sat on the edge of the stage to harmonize on a pair of light melodies for an extended encore, with a crowd that could have cheered all night. Ultimately, the group launched into a near- perfect, beautifully rendered "Tam, Gdzie Nie Siega Wzrok.'' It was quite a finish to quite a show.

An informal reception included free refreshments for the audience while Jopek huddled with Polish dignitaries. Judging from the crowd's visibly positive response during and afterward, this concert was communal comfort food and exactly what the audience wanted.

Jopek and her countrymen delivered the goods, all the way from home.