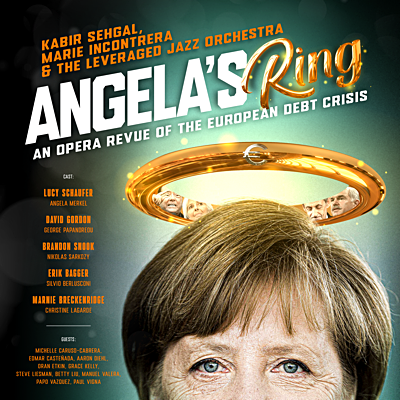 Opera, we are told, has long been political, and not just since Verdi and Wagner. What would West End musical theater be without Les Mis? Or drama without Barbara Garson's 1966 play, Macbird? Yes, even economics makes a token appearance in Oscar Wilde's The Importance of Being Earnest. In fact, Wilde's famous line "Cecily, you will read your Political Economy in my absence. The chapter of the fall of the rupee you may omit. It is somewhat too sensational." Oh boy. Wilde never dreamed of what the many talented Kabir Sehgal would do with the Euro, which would have seemed the height of improbability to him anyway. Forget sensational. If you think opera is, inevitably, Carmen, think again.

Some readers at All About Jazz may not be deeply interested in international trade and finance. It is an acquired taste, at best. But Sehgal, who plays jazz bass, is a graduate of the London School of Economics, was an executive at J.P. Morgan. He isn't just blowing smoke here, you see. Angela's Ring: An Opera Review of the European Debt Crisis, with music by Marie Incontrera and The Leveraged Jazz Orchestra (is that a pun, on leverage or borrowing, too?) is the real thing. No, there are no technical discussions of covered exchange rate parity. Thank God, there are no equations in sight. What you get is an arch, knowing, humorous, brilliant, scatological, and ultimately painfully ironic discussion of how real politicians make real mistakes with real money based on economic theories and end up destroying real lives, in this case, Greek ones. But the lesson could be more broadly drawn. With a common currency, be careful what you wish for. You might get it.

The opera starts and ends, viciously, with Beethoven's "Ode to Joy" from his Ninth Symphony. But the words aren't Friederich Schiller's but Sehgal's. Angela Merkel (Lucy Schauffer), the German Prime Minister, signing the Treaty of Maastricht (1992) and warbling "Das is good." "Markets open, inflation humble, Europe's riches grow double." Just the thing to keep the Europeans from going to war again. A common currency for the European Community, a long-held technocrat's dream come true. There is, alas, a catch: a common currency is a bit like a marriage. It depends on trust, honesty, frequent (commercial) intercourse, and a willingness to ignore a partner's obvious flaws. And equal partners are rarely, if ever, equal partners. Without getting technical, it wasn't obvious, ever, that some of Europe's weaker economies (Portugal, Italy, Greece and Spain, bearing the cruel acronym, PIGS) could compete with the Northern powerhouses. Greece, especially was a stretch. A tempting place for Germans to do business and make money, but, alas, not love. The Greek Prime Minister, George Papandreou (David Gordon) enters into a corrupt bargain, an accessory to the fact that the Greek economy is even worse than it might look on paper, since the Greeks were cooking the books. "Let us lie together in this bed... Pull the sheets over your head." "Let us lie together! Let us lie!" And, thus, the marriage is consummated.

Papandreou and the Greek bankers become the recipients of German largess. But, predictably, overindulge (to the dance music of Zorba the Greek) and awake broke and hung over. Christine Lagarde (Marnie Breckenridge) drawn archly by Sehgal as a goddess, an angel, and a shrew (you can ask the International Monetary Fund about that) warbles "You borrowed and spent... Time to repent, or you are screwed." It gets worse. Silvio Berlusconi (Erik Bagger), the Prime Minister of Italy, sagely advises Papandreou that Italy's (debt) is bigger, and, anyway girls just want to have fun. Whereupon they waltz to a tune entitled "Bunga! Bunga! Bunga!" Like Sehgal says, you can't make this stuff up, and he didn't.

Of course, the Greeks can't repay their debts (surprise). And therein follows the remainder of the opera, spotlighting the efforts of Nicholas Sarkozy (Brandon Snook) and Merkel (would you believe "Markozy," as in the ex-Brangelina), to get the Greeks debt relief and save the Euro from catastrophe, with the Greeks crashing out of the currency union (called Grexit) and the entire project coming to grief. There is an absolutely priceless account of Sarkozy and Merkel at Deauville Beach in France, with Sarkozy observing (and, if anything, Sarkozy comes off even worse than Berlusconi) "Destroy the Euro, our wars resume. Do you want peace or doom." No, it isn't fiction. Maybe they weren't on the beach together, but I recall seeing photos of Markozy gazing deeply into each other's eyes. To repeat, you can't make this stuff up. Such is the world of international finance.

The rest is devoted to the convulsions in Greece that the European Union and International Monetary Fund's structural adjustment program ("austerity") puts the Greeks through: tax increases, wage cuts, pension freezes: all kinds of "reforms" as the price of a bailout. "Fiscal cutbacks! Parsimony!" Recessions, riots and protests predictably follow. As in the beginning, so at the end, with the "Ode to Joy," the Germans coughing up money they never wanted to part with anyway, and Lagarde and everybody singing, "Let us lie together! Let us lie." Oh, boy.

I had to admit I spent so much time laughing through Angela's Ring that I didn't pay an awful lot of attention to the music the first time around. The Leveraged Jazz Orchestra gives a pretty credible rendering of a "legitimate" score, although they really don't get much of an opportunity to blow until well into the opera. I was particularly struck by the soulful clarinet playing of Oran Etkin and the incredibly hip saxophone work of Grace Kelly. This isn't to slight anyone else. All the musicians are excellent, and to my ears, at least, the score couldn't have been easy to play.

Opera is a visual art as well, and listening to the score and reading the libretto can only take you so far. You're a bit hard pressed to figure who on Earth could stage this thing, other than the combined forces of the music and business schools at the University of Rochester or New York University. But really, to properly appreciate the effect of the entire opus, you'd have to see it. It might not be a bad idea to have someone interrupt (the newscasts are clever, but not enough) occasionally and explain to the audience what's going on. Everything does seemingly wrap up too abruptly, but there will be some rewriting before this actually hits the stage. And one really hopes it does. Coming to a "bankster" near you.