“The work is gripping, and it is unlike any other opera... X is a work that deserves to enter the American repertory... not just a stirring and well-fashioned opera but one whose music adds a new, individual voice to those previously heard in our opera houses.” —The New Yorker “Poignant…forceful…resonant” —The Boston Globe “A riveting and ...

Guitarist, improviser, composer, conductor. Enzo Rocco has taken part in various groups since the early ‘90 also attendeding contemporary music, music for theatre and ballet, folk music, happenings and improvisations with poets and with painters. With his groups he has recorded a dozen of CDs (very well reviewed by the press all over the world) and he has played everywhere in Europe and often in Japan, Indonesia, Latin America, Northern Africa. Nowadays, after closing the eight-years experience of the Tubatrio - his own group with Giancarlo Schiaffini (trombone/tuba/electronics) and Ettore Fioravanti (drums) - he leads his own amusing “bass-less” New Trio (bass clarinet, drums, guitar) as well as keeps travelling around the world with Carlo Actis Dato (the humoristic, crazy duo being born in 1997)

Kabir Sehgal, Marie Incontrera, et al. Angela's Ring Tiger Turn 2021 Opera, we are told, has long been political, and not just since Verdi and Wagner. What would West End musical theater be without Les Mis? Or drama without Barbara Garson's 1966 play, Macbird? Yes, even economics makes a token appearance ...

Raised in jazz music, Janinah Burnett is the daughter of legendary jazz drummer Carl Burnett and writer/educator/artist Imani Constance. As a child, Janinah was surrounded by Horace Silver, Freddie Hubbard, Eddie Harris, Nancy Wilson, George Cables, Billy Higgins, and many others who inspired her early musical beginnings. This innovative and exceptionally artistic beginning led to a myriad of musical activities throughout Janinah’s formative years. While in school at the Hamilton Music Academy in Los Angeles, Janinah won the solo vocal jazz competition at Cal State Fullerton, propelling her desire to serve her artistic muse and study vocal jazz music at Spelman College. Never wishing to be limited to any one genre, Janinah was clear she wanted to be able to use her voice to sing all styles 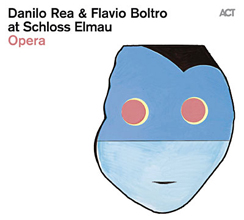 Opera is a big art form: elaborate sets; high, occasionally overwrought, drama; large orchestras; and, of course, the singers. So what happens to this art form when almost everything is stripped away and the melodies are recreated by a simple duo of piano and trumpet? On the evidence of Opera, the first duo project from pianist ...