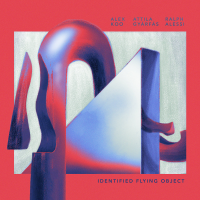 Belgian-Japanese pianist Alex Koo and Hungarian drummer Attila Gyarfas formed the duo Identified Flying Object to explore fully improvised music that has one foot in jazz, one in chamber music, another in minimalism, and a fourth in electronic manipulations. Their initial release Galactic Liturgy (2017) is followed up here with the addition of Ralph Alessi's trumpet and piccolo trumpet. Alessi, along with Mark Turner, was heard on the stunningly beautiful Appleblueseagreen (Clever Tree Records, 2019).

Where Galactic Liturgy is totally improvised and Appleblueseagreen contains all original compositions, this release has a mix of both, but focuses on the superlative writing of Koo. The opening track, "Nebula," concentrates on a pulsating tempo supplied by Koo and Gyárfás while Alessi is set free to deliver the melody with his plush trumpet voice. The music progresses, but not with overindulgent licks. Rather, there is a quiet patience to this music. "Levitate!" finds Koo's piano notes and Gyárfás' brush-work falling as raindrops with Alessi's furtive trumpet whispering into the eventual nebulizing electronic haze. This trail of dreamscapes, such as "Aurora" and "Underwater Star Based Society" are contrasted by the chaotic piano and drum improvisation "Toy Pianos" and speed jazz of "Ready, Set, Go" which finds a direct connection to Dewey Redman's "Mushi Mushi" from Keith Jarrett's Bop-Be (Impulse!, 1978). Whether conscious or unconscious, that connection to the early experiments of Jarrett is apparent here. The three-way improvisation of "Maenads" finds its level with an electronic hum and pounded drums, with Alessi summoning the ghost of Miles Davis as the track ends. The centerpiece of this recording is the 11-minute "Source Of The Ten Thousand Things" which acts as an almost minimalist journey with electronic washes, piano colouring, and cymbal-accented conversation between Koo and Gyárfás.