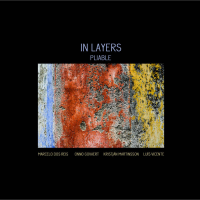 Dos Reis and Vicente's liking for unhurried group congress has surfaced in multiple guises, prominent among them being Points (Multikulti Project, 2019), Chamber 4 (FMR, 2015) and For Sale (Clean Feed, 2015), and it's an aesthetic that all sign up to here also. Vicente spans the gamut from Miles Davis via Bill Dixon to extended techniques of slobber, gurgle and mutter, but he's at the sweeter end of the spectrum for the opening of "Supple," in which everyone contributes sparse rejoinders to the trumpeter's lyric musing, testifying that they know that less can be more. In its placement, each sound lands just right.

Dos Reis' tendency towards either repeated motifs or continuous textures affirms that feeling can always be aided by form. At various junctures during the six cuts he grounds the quartet, sometimes with a phrase like the rhythmic scratchy figure on "Ductile" or the implied pulse he and Govaert settle upon during "Elastic." He even helps direct proceedings by deciding not to play. When he abruptly halts a buzzy bowed drone at the close of "Supple," it throws the prickly outbursts of percussive piano and trumpet flurries into sharp relief.

Such transitions instantly change direction and mood throughout. Later in "Malleable," the others return the favor to isolate Dos Reis' scrabbly guitar for the only prolonged solo passage on the disc. Then again, at the end of the piece a fractious exchange suddenly evaporates, leaving Martinsson's in-the-moment prepared piano to pick up the baton. Govaert's choices, whether tonal patter or choppy throb, often govern the balance between reflective discourse and rambunctious mayhem. But whichever route they take, the outcome is topnotch.