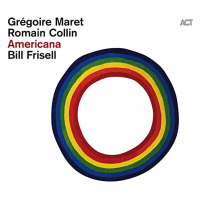 Harmonica player and composer Gregoire Maret is not a familiar name in the U.S. but he should be. The New York-based artist has recorded with Jimmy Scott, Jacky Terrasson, Steve Coleman and Five Elements, Charlie Hunter, Terri Lyne Carrington, Pat Metheny and many others. The very bankable musician has appeared on over seventy-five releases as a sideman and has recorded as a leader on three albums. Americana unites Maret with pianist, composer and label-mate Romain Collin, along with legendary guitarist Bill Frisell, and drummer Clarence Penn on one track.

The music on Americana comes from the perspective of two immigrants to the U.S.; the Swiss-native Maret, and Frenchman Collin. On many tracks Frisell adds the authenticity he brought to his own Nonesuch Records projects such as Nashville (1997), Good Dog, Happy Man (1999) and Disfarmer (2009). Maret and Collin often perform as a duo and open the album with the unexpected; Scottish-born Mark Knopfler's Dire Straits song "Brothers in Arms" feels like a natural here. Frisell then joins in on two of his own compositions, "Small Town" and "Rain, Rain" given a fresh feel with Maret's contributions.

Collin's "San Luis Obispo" appeared on the pianist's Press Enter (ACT Music, 2015); a beautiful Appalachian-tinged lullaby, sparse and haunting in its original piano form, Frisell and Maret give it a down-to-earth reading. Maret's "Back Home" is the only appearance of Penn who adds some light brushwork. The trio takes on the Jimmy Webb classic "Wichita Lineman" and the Justin Vernon composition "Re: Stacks" from the Dirty Bourbon River Show debut For Emma, Forever Ago (Self-produced, 2007).

In Collin, Maret and Frisell we have artists of three origins, entangled together in the early influences of U.S. music; they urge the listener to hear common threads. Americana is a journey guided by distant lights, and the musicians lead each other in an alliance that is both conversant and spiritual. Highly recommended.