Altamont: The Rolling Stones, The Hell's Angels and The Inside Story of Rock's Darkest Day

By DOUG COLLETTE
September 24, 2016
Sign in to view read count 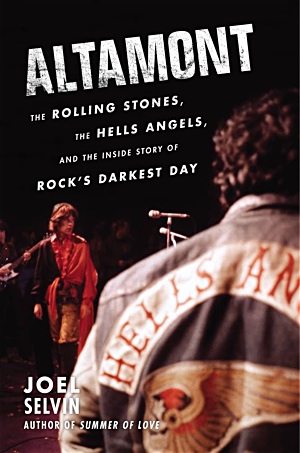 The best books on rock and roll have invariably been comprised of layer upon layer of information interwoven with insight and Joel Selvin's Altamont is exactly that kind of book. Formally and informally ensconced in the San Francisco scene for decades, he brings his knowing perceptions to bear on the mind set of the The Rolling Stones when Mick Jagger, Keith Richards and company were making their return to the public eye in 1969.

As the former scribe for the San Francisco Chronicle so sagely observes and judiciously reiterates throughout this book, the rock zeitgeist had changed in fundamental ways during the British band's three-year hiatus from touring. And the group itself was directly and fundamentally altered through the ouster and subsequent (mysterious) death of founding Stones member Brian Jones the very year Altamont took place. Selvin hardly overstates the Stones' aims to extricate themselves from purportedly dire financial straits because their mercenary approach, combined with a willful ignorance of detail pertinent to the overall operations of the free (sic) concert, constituted the dual tipping point of the eventual tragedy.

Near the very end of this book, Joel Selvin provides a most discerning summary of the film Gimme Shelter and, in doing so after regaling the reader with a plethora of details of the sequence of events leading to the event, he (re) places his story in perspective. In fact, for anyone who's seen the film, then read The Rolling Stones The Hell's Angels and Rock's Darkest Day, the movie thus becomes almost nothing more than a cursory storyboard for a piece of cinema mirroring this book.

In fact, there should be a film of this book. In gleaning a timeline from hundreds of interviews, he creates a three-hundred-sixty degree perspective on December 6, 1969 that even the comprehensive Rolling Stone Magazine doesn't manage to formulate. Setting the stage in 'Part 1,' the author captures the momentum as it builds, even as preparation for the event quickly goes off the rails upon the loss of San Francisco's Golden Gate Park as the initial site.

The suspense only grows as the author conjures up the ominous atmosphere of the date itself after Jagger's refusal to negotiate in good faith puts the kibosh on the first alternative site, Sears Point Raceway. Joel Selvin's details of the gargantuan effort expended by the crews hustling to put in place staging, lights etc that end up an untenable fit on Dick Carter's rundown track in Altamont. His descriptions of the unfurling of the performances by bands including Jefferson Airplane and CSNY, it's almost as if the action slides into slow motion. That is, until the Rolling Stones hit the stage, at which point everything speeds up in all too similar a fashion to the motorcycles of the Hell's Angels, hired for beer to provide security; commandeering the stage in short order, the cult determined the direction of events arguably more than any other single party involved, even before things got underway (telling photos appear to confirm pending and actual circumstances).

Events grind to a halt, however, in the frozen moments involving the stabbing of Meredith Hunter as the Rolling Stones play. Selvin's perceptions of the quintet's intense musicianship shares are as vivid as all the others on subsequent pages plus he's editorially wise enough to let facts as he found them speak for themselves. Thus, he doesn't belabor the delay(s) in the investigation of the murder or the long-term ramifications of the concert on the Altamont area or, especially, rock and roll culture at large.

Perhaps because of his familiarity with the West Coast scene, Joel Selvin can't opt for the generally accepted but simplistic interpretation of the debacle as the evil mirror image of Woodstock. But early in the book, casting his discerning eye on Great Britain, the far-removed home of the Rolling Stones, he does quite clearly delineate the conflicting forces in play as the event materialized, the clarifying point of which may well be the involvement of the Grateful Dead, whose role in this UN-comedy of errors is given such short shrift in cinema. The writer's discussion of Jerry Garcia and co. is especially insightful in the appropriately designated 'Afterword.'

In taking this approach, however, the author refuses to minimize his criticism of the Rolling Stones, any more than did two principals in this sequence of events, promoter Bill Graham or journalist Ralph J. Gleason. Joel Selvin's careful depiction of Jagger's reaction to the film, however, is far less damning than his quote of Richards' disingenuous comments regarding American versus English audiences. And this artful denouement comes after this author's been so consistently artful throughout Altamont in depicting the group's shortsightedness as clearly as their self-absorption, multiple self-indulgences and outright irresponsibility on ancillary business arrangements such as travel and lodging.

Indeed, the writer's summary of the effect wrought on the iconic group by this horrific experience might well apply to the entire generation of which they are part: ..."challenging neither themselves or their audience...(they) settled for being caricatures of themselves, a raucous and colorful but ultimately meaningless sideshow..."