By DAN MCCLENAGHAN
February 22, 2011
Sign in to view read count 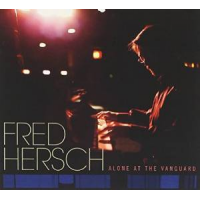 Pianist Fred Hersch almost cashed out back in 2008, when he fell ill with AIDs-related complications and spent seven weeks in a coma. The recovery was arduous, the resumption of his wide-ranging and top-level musical artistry uncertain—an uncertainty erased without a trace by Whirl (Palmetto Records, 2010), a trio set so assured, vibrant and beautiful that it would surely show up in any knowing top ten list of the best piano trio sets of the new millennium's first decade.

There was a subtle change in Hersch's sound, post illness. It's what Hersch's fellow pianist, Jessica Williams (who has suffered her own health problems), calls "illness as a teacher," a focusing of intent and approach from the washing away of the peripheral and unimportant.

Alone at the Vanguard is Hersch's solo piano offering, recorded on the last night of a six-night stand at the hallowed New York club where innumerable jazz greats have held court and recorded performances, resulting in classic albums. Hersch opens his set on a shimmering introduction to "In the Wee Small Hours of the Morning," an old American Songbook jewel that gets buffed up often. Hersch has what it takes to ignore the "never open with a ballad" advice: a supple and exquisitely-refined touch; a sharp focus on the melody; a deep sense of classical harmony; and a magical ability to get inside the tune and make it his own. Hersch's sound here has a uncommon fragility/strength dynamic, and it is serious and cerebral, with an opposing simplicity buoyed by a rich complexity, born of a lifetime's immersion in the music.

Hersch gives Jacob de Bandolim's "Doce de Coco" a sense of frisky, devil-may-care grace, and he slows down the standard "Memories of You" and turns it into a ruminative prayer.

Almost all jazz pianists like to get lost inside the idiosyncratic tunes of Thelonious Monk, and Fred Hersch is no exception, but few do it as well. His study of Monk's "Work" sounds like joyous play, full of very erudite Hersch-ian turns, fun and at the same time stately, a closer that demanded an encore: Sonny Rollins' "Doxy." Hersch delivers that tune at a measured pace, drawing the sound into a timeless and bluesy wee hours mood, a majestic wrap-up of an exceptional night of music at the Village Vanguard.

In the Wee Small Hours of the Morning; Down Home; Echoes; Lee's Dream; Pastorale; Doce de Coco; Memories of You; Work; Encore: Doxy.