Maximize your visibility at All About Jazz by upgrading your musician page from standard to premium. With it, you'll receive All About Jazz home page exposure, a highly stylized / ad-free musician page with bonus features and benefits, an ad, plus you control where you sell your music and so much more.
Learn More
139

BY IAN PATTERSON
February 22, 2011
Sign in to view read count 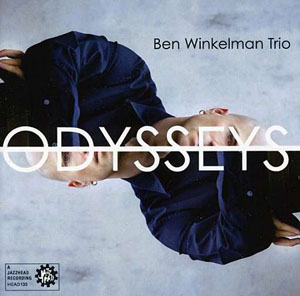 Something special is needed for a piano trio to make a splash these days, so crowded are the waters with talent. With Odysseys, however, pianist Ben Winkelman's trio manages just that. For seventy absorbing minutes, the trio captures the ear, providing thrilling evidence of a stellar contemporary trio to rank among the best. Australia's press has lavished praise on Winkelman since his debut Stomps, Pieces and Variations (Jazzhead, 2005), but the outside world has been slow to catch on.

In "The Seven Odyssey," Winkleman expresses more ideas in ten breathtaking minutes than many pianists do on an entire CD. The title refers to its 7/4 Cuban rhythm, but could almost refer to the number of different styles that flow from the pianist: Winkleman skips from hypnotic isorhythms to Afro-Carribean grooves, which then give way to jaunty ragtime figures; these, in turn, dissolve in fractured tempos and occasional playful dissonance, which hint subtly at the influence of pianist Thelonious Monk. European classical veins, of etude-like simplicity and elegance, also find their way into the mix.

It might sound like too many eggs in one basket, but there's a tremendous cohesion and natural flow to Winkleman's sweeping compositional imagination. Like a magician pulling a seemingly endless handkerchief from a pocket, Winkleman uncoils single-note lines of numerous colors in a surprisingly spare manner, given just how much is going on. Winkelman has highly attuned and empathetic partners in bassist Sam Anning and drummer Ben Vanderwal, whose crisp style is punctuated by myriad telling accents: huffing hi-hat; rim rhythms like tap dance; tambourine; wood block; and cowbell. Anning anchors the trio with quietly stated contrapuntal lines, coming into his own with lyrical statements on the episodic "Vampires," which evolves from a dark-toned mood piece to outright swing, and on the touching ballad, "Dislocation."

Dancing Brazilian rhythms and Winkleman's classical leanings happily coexist in the highly melodic "Quandaries," with Vanderwal's ride cymbal driving the trio. The drummer's brush work is exquisite on the unhurried, lyrical "Dislocation," and his light touch on the cymbals lends wonderful support and nuance to Winkelman's delicate musings.

The joyful, freewheeling "Stevie's Warm Chords" and impressionistic "Avian Melancholy" stand in sharp juxtaposition, underlining the great emotional range of this trio. Winkelman's flow of chords acts like little bridges between his arresting runs. The mere spark of an idea is fanned on "Steppin' To," and is a fascinating exercise in disciplined interplay. The 5/4 time of "The Five Odessey" closes out the album in as strong a fashion as it began, with Cuban chords patiently building tension before segueing into a delightful reggae groove, over which Winkelman and Anning trade back and forth playfully.

Odysseys succeeds on every level: melodious, with a healthy dose of dissonance; swinging, yet making elbow room for odd meters; alternatively grooving and melancholy; technically impressive; and always engaging. Winkelman's compositions strike a fine balance between structure and freedom, and this fine trio statement whets the appetite for what lies ahead.