By DAN BILAWSKY
September 12, 2016
Sign in to view read count 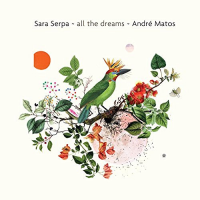 There may be no combination better capable of painting and promoting aural iridescence than that of vocalist Sara Serpa and guitarist André Matos. The work they've produced together, both on their first duo album—Primavera (Inner Circle Music, 2014)—and on this alluring outing, pits consistency against the transient nature of sonic coloration in understated yet spectacular fashion. Their music is art at the point where minimalism and cangiante merge, resulting in an otherworldly sound that's utterly enthralling and completely unique.

All The Dreams is a collection of miniatures—all but one of its fourteen pieces clock in under four minutes—but Serpa and Matos make the most out of each fleeting and floating vehicle. There are moments where mystery holds sway over the proceedings ("A La Montage"), there are times when a child-like sense of curiosity seamlessly shifts into more mature arenas ("Programa"), and there are places where a sense of pure peacefulness is embodied in downward drifts ("Postlude"). The music manages to be both ethereal and earthly all at once.

While this is a duo date in a general sense, it expands on that concept in several ways. First, there's the use of the studio as a third partner in the equation. Serpa and Matos make artful use of it, adding intoxicating overdubs ("A La Montagne"), reversing vocals ("amlaC"), and working other instruments around vocals and guitar. Next, there's the shadow of the authors and poets who hover over the music, as various songs touch on the written work of Luis Amaro ("Programo"), Alvaro de Campos ("Nada"), William Blake ("Night"), and Clarice Lispector ("Os Outros"). And lastly, there's the presence of two guests—Pete Rende, who adds synthesizer on three tracks, and Billy Mintz, who brings oh-so-sensitive and subtle percussive touches into the mix on four numbers. Each adds important textures to the music without detracting from the intimate vibe. The beauty and wonder in dreams, be it hazy, haunting, or heartwarming, is alive and well here.