Home » Jazz Articles » Hedvig Mollestad Trio: All of Them Witches 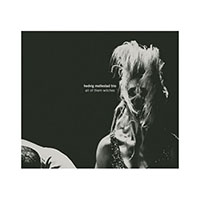 It may well be sexist to suggest that there are few female heavy rock guitarists. Still, as society moves towards greater equity among the genders, there are thankfully a lot more talented and intrepid women transcending conventional expectations of their "place" in music—and few countries exemplifying this more than Norway. Sidsel Endresen may be a singer, but she's far from the norm; saxophonists like Froy Aagre and Hanna Paulsberg are pushing their own jazz boundaries, as is trumpeter Gunhild Seim. In the realm of electric guitar, few women play like Hedvig Mollestad Thomassen. On Shoot! (Rune Grammofon, 2011), the jazz-schooled guitarist made it crystal clear that fist-pumping, head-banging, ear-shattering instrumental rock music is no longer a purview belonging solely to the males of the species. If anything, Shoot! completely blasted through boundaries of gender and genre for one of the year's absolutely heaviest debuts.

All of Them Witches further expands upon Shoot! with an even weightier disposition, sitting somewhere between metal progenitors Black Sabbath and Led Zeppelin, progressive rockers like Rush, and Norwegian contemporaries like Bushman's Revenge, Motorpsycho and El Doom and the Electric, in which Mollestad Thomassen also plays. The trio's spontaneous, in-the-moment approach to these ten originals may belie its adherence to form; jazz, by reductionist definition, it most certainly is not, but one of this trio's sonic cornerstones is Brekken's double bass—rare in this musical sphere, but a sound that absolutely brings the quieter, slightly Americana-tinged "Shawshank," along with Bjørnstad's delicate cymbal work, a more authentic vibe.

If double bass seems an inappropriate instrument for up-tempo, pedal-to-the-metal tunes like "The New Judas," think again. And if "testosterone-filled virtuosity" seems, by definition (and biology) to be intrinsically male, then Mollestad Thomassen's fiery playing suggests it may be time to reconsider the term. Mollestad Thomassen is as aggressive, jagged and strong as they come, her tart, overdriven tone a thing of beauty as she moves from sharp double-stops, angry dissonances and brief wah wah and delay dalliances to the occasional Jimi Hendrixian feedback and thrilling, whammy bar-driven histrionics that put Tony Iommi, Jimmy Page, Sonny Sharrock and Fred Frith in a blender on "high."

In an arena defined, in part, by self-indulgence and "look-at-me" pyrotechnics, Hedvig Mollestad Trio certainly draws plenty of attention. Bjørnstad combines the thundering tone of John Bonham with occasional signs of tasteful elegance, and Brekken's massive tone anchors everything in sight while, on the closing "Kathmandu," proving a more than capable soloist. Mollestad Thomassen may choose a harder-edged, sometimes downright grungy tone on "The Rex," but on her a cappella tour de force, "Ghrá Rúnda," the guitarist demonstrates, in just three minutes, remarkable breadth, taste...and knowledge, transcending anything close to typical—whatever space this music inhabits.

Not for those looking to protect their eardrums, All of Them Witches is best played loud. With its diversity of feel and breadth of aural landscapes, it's a record that may well engender some internal fist-pumping, but Hedvig Mollestad Trio's compelling writing and take-no-prisoners approach to playing show it clearly has plenty more to offer than much of the musical space it occupies.