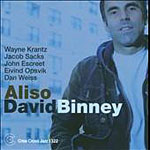 In a career now in its third decade, alto saxophonist David Binney's greatest accomplishment, despite being a player of no small worth, has been as a composer whose often knottily idiosyncratic tunes manage to remain not just accessible, but deeply compelling. From the earliest days of Lost Tribe through to last year's outstanding Third Occasion, Binney's distinctive compositional style has become a touchstone for players on the New York scene and beyond.

It's not that he can't play directly in the tradition—his own work couldn't come from anyplace but—he just generally chooses not to. While past albums, including 2005's Bastion of Sanity (Criss Cross), have occasionally included songs from the standards repertoire, the saxophonist has never before released an album like Aliso, where five of its nine tracks are not Binney originals, taking up well over half of its 73-minute running time.

A function of its participants being unable to convene until the night before the recording, Aliso could be considered a tad schizophrenic. Binney's tunes are not exactly more direct, but they are less complex, encouraging even greater emphasis on blowing; a nice dovetail with music from Wayne Shorter, Thelonious Monk, Sam Rivers and John Coltrane. With a largely fixed quintet (only the piano chair is shared, between John Escreet and the more prevalent Jacob Sacks), Binney demonstrates his considerable alto prowess with both dark balladry and elegant swing (Shorter's "Teru" and "Toy Tune," respectively). He also shows a lesser-known ability to rip through changes coming fast and furious, on a burning take of Rivers' "Fuchsia Swing Song."

The rest of the band also capably handles Binney's modern approach to the mainstream, especially bassist Eivind Opsvik and drummer Dan Weiss, who are rarely heard in straight-ahead settings. But for those jonesing for more of the Binney they've come to know and love, the saxophonist's four compositions more than do the trick. Guitarist Wayne Krantz—last heard on a Binney album in 2002 (Balance, on ACT) and whose Krantz Carlock Lefebvre (Abstract Logix) was a 2009 fusion milestone—sits out on most of the standards, but his contribution to the rest of Aliso is purposeful; uncanny in its ability to push and pull time, harmony and melody, all with a slightly gritty tone and idiosyncratic turn of phrase. Whether it's the more visceral groove of the title track—which also features one of Binney's most effervescent solos of the set—the more temporally elastic "A Day in Music" or metrically challenged "Bar Life," Krantz's inimitable playing supports Binney's assertion, "Wayne is one of my favorite musicians ever."

Krantz does join on a pedal-to-the-metal version of Coltrane's modal masterpiece, "Africa"—the cover tune that aesthetically fits best with Binney's own writing, despite its inherent compositional simplicity. There's nothing wrong with being a little schizophrenic; not, at least, when the result is as unmistakably fine as Aliso—an anomaly in Binney's discography, perhaps, but one that still remains a significant marker in his overall body of work.