A very respectable audience braved the cold temperatures (for London where since global warming kicked in it rarely falls below freezing for very long) and further impending snow for the debut of the Alexander Hawkins new quartet at the Vortex. Hawkins continues to make waves having in the last month of 2009 enjoyed a successful meeting with Joe McPhee and his first New York gigs alongside downtown stalwarts Rob Brown, Ted Daniel, Harris Eisenstadt and Mark Helias. 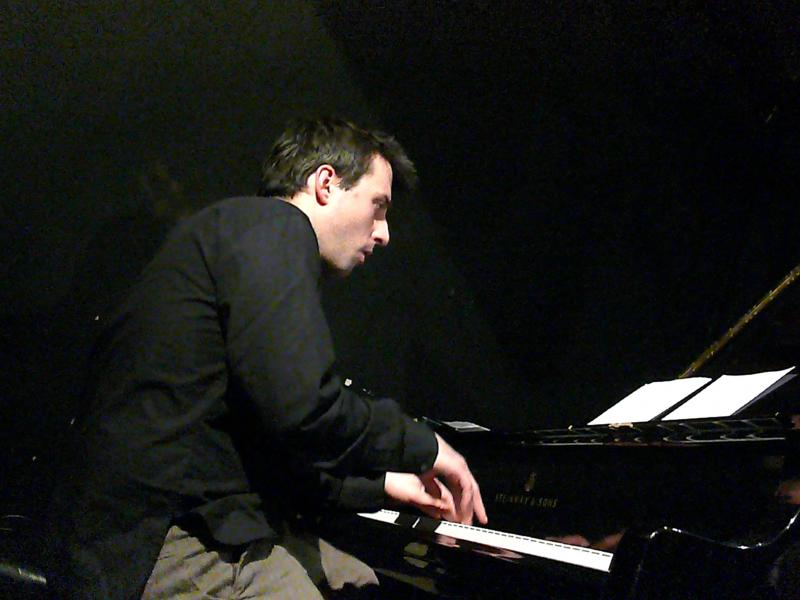 More accustomed to helming his unique sextet which released the widely acclaimed No Now Is So... (FMR, 2009), the pianist's group tonight was founded on a more conventional instrumentation, again featuring regular associate Dominic Lash on bass, but adding Mark Sanders on drums, and Shabaka Hutchings on bass clarinet and tenor saxophone, alongside the leader at the Vortex grand. Though the line-up might have changed, the tactics hadn't. Hawkins continued to mine a rich vein from the free jazz seam, mixing classics by Steve Lacy, Roscoe Mitchell, Dudu Pukwana and Ornette Coleman with his own charts over two sets spanning some 90 minutes.

One of the fascinating aspects of Hawkins music is that even though working within compositional frameworks, he nonetheless encompasses the full breadth of contemporary jazz, including gambits more associated with total improvisation. Opening with a sprightly swinging version of Steve Lacy's "Prospectus" it wasn't long until the band took it further out with the leader showing the way with an unfettered two-handed extravaganza, initially pecking then stabbing out reverberating clusters and chords. Hawkins had chosen his partners wisely: they were at home navigating a range of terrain, reveling in Dudu Pukwana's luxuriant ballad "Be My Dear," which boasted particularly graceful and tender melodicisms from Hutching's mellifluous bass clarinet, but also negotiating with aplomb the thorny undergrowth of Roscoe Mitchell's "Chant." 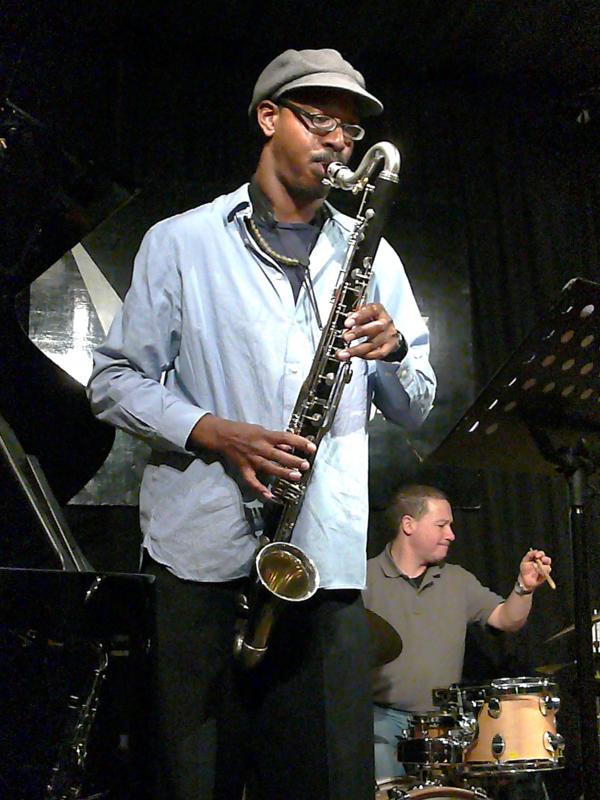 This new quartet proved a splendid vehicle for Hawkins' enthralling piano playing, with several dazzling introductory cadenzas prominent in the first set. His own "Elmoic" was a case in point, starting with such sparse piano that you could easily hear the piano stool squeaking between notes. Soon he was juxtaposing emphatic left hand chords with pealing right hand runs, then stringing his phrases together into elongated streaming lines for a marvelously inventive, kaleidoscopic preface, just pausing, as if for breath, before the bouncy off kilter cadence of the theme. Even then he wasn't finished as he later plotted a fine accompanied solo, keeping the tune going with one hand while hyperkinetic with the other, then with both, but somehow still referencing the melody amongst the commotion.

As good as the first set was it was the second which really piqued the imagination, running together four diverse compositions linked by acapella solos for smoothly managed transitions. While the opening set had been notable for various wonderful Hawkins' excursions at the Steinway, it was the turn of the rest of the band now. They kicked off with a rubato version of Ornette Coleman's "Morning Song" featuring Hutchings' burnished tenor scribbles over dense swirling undercurrents which lifted him up onto his toes repeating sustained cries over churning crescendos.

Gradually the intensity waned to leave Lash a lone voice. Like Hawkins, the bassist grows in stature both as a soloist and integral part of any ensemble with each passing month. His feature here became a key witness in support of that proposal, piloting an almost architectural design. Repeated legato bowing drew a startling wavering drone akin to throat singing from his bull fiddle, sending buzzing harmonic overtones fizzing round the room. As he maintained his deep earth shattering arco, he alternately moved his fingers on and off the fretboard, evincing twin contrasting voices. Finally after a growling pizzicato he resolved the tension with the loping ostinato of his own composition "Second," picked up by first Hawkins and then the rest of the band with a funky swagger. 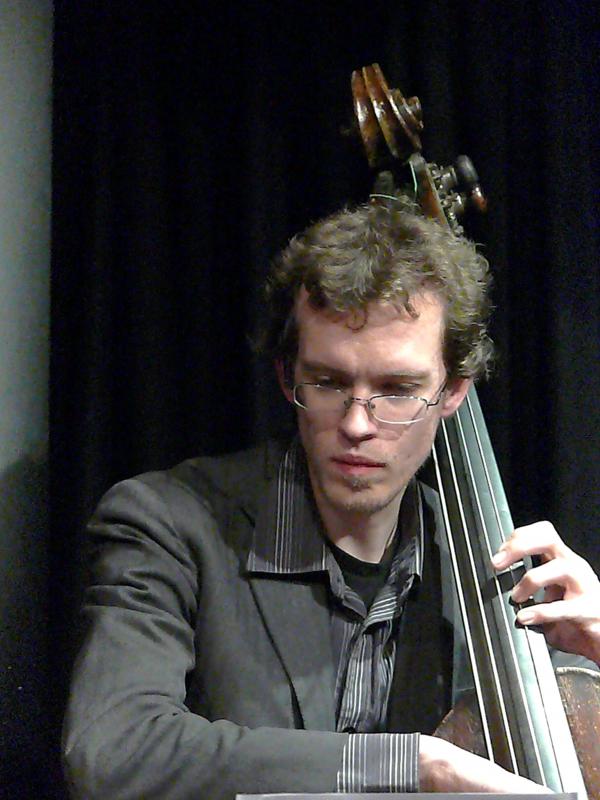 More fluent group interplay culminated in Sanders interpolating a syncopated passage on the rims of his snare, begetting a polyrhythmic storm. Sanders has become one of UK scene's go to drummers assured whether dealing in pulse or pageantry and packing a strong rhythmic charge. Recorded evidence abounds with his contribution to the hugely impressive Fire Fox (Maya 2009) with Barry Guy and Ken Vandermark being but the most recent occurrence. He demonstrated a fine ear for detail as, eyes closed tight, lips pursed in concentration looking to the side, his sticks circled balletically around his kit, then suddenly repeatedly struck his crash cymbal and immediately dampened it with both hands for a stunning attenuated shimmer and a resounding conclusion.

Another Hawkins tune "Proverbs" emerged from Sanders outro, which foregrounded sonorous bass clarinet in duet with squeaky door arco bass, followed by more spacious percussive textures and four way interaction, which itself gave way to spotlit feature for Hutchings on tenor saxophone. Barbados born Hutchings is another upcoming talent, bridging the Jazz Warriors diaspora, where he was on the roster for the "Afropeans" tour with Courtney Pine, and the free improv scene where he appears with the London Improvisors Orchestra and partners drummer Roger Turner and keyboard man Pat Thomas. Up to this point Hutchings had acquitted himself well, but this was where he really showed his mettle. Starting with breathy false-fingered whimpers, he built his solo logically expanding on each idea and extending it. From fraying notes with distortion to deep throaty blurts, he deployed the full lexicon of avant techniques with impassioned expressiveness. Hawkins layered the repeated melodic line of his own "Song Dance Blues" behind him as Hutchings combined voice and tenor in a great gobbling outpouring replete with squeals and stentorian blasts, stopping just short of combustion. Meanwhile bass and drums reached a tumult, while the pianist persisted with his thematic motif amid the mayhem, until they subsided into silence. An excellent sequence which elicited full blooded approval.

To round the set off in a satisfying mirror image of its start, they lurched somewhat raggedly into a second Ornette Coleman piece to end with a sparky flourish. Outside the snow was just beginning to fall. Like me the band all live out of town, and had risked becoming snowbound to make tonight's gig, but the warm glow they received from the enthusiastic audience would have been sufficient to ward off even the worst blizzard conditions.