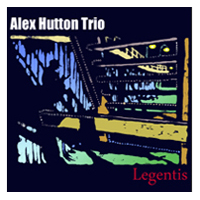 There has been a flurry of activity around screen composers this spring 2012, all of it good. Warner Jazz has released an anthology of movie theme music written by Nino Rota, Collector Nino Rota; British pianist John Taylor is poised to release a tribute to the film and TV composer Carlo Rustichelli, Giulia's Thursdays (Cam Jazz); University of Illinois Press has published John Caps' Henry Mancini: Reinventing Film Music.

All these items have an Italian connection, albeit, in Mancini's case, with "Little Italy" in Cleveland, Ohio. Alex Hutton's Legentis is more north European in provenance and ambience, despite the Latin title. The British pianist cites Elmer Bernstein and John Williams among the inspirations of the album. Much of those composers' work has been conceived for big orchestras; it is a wonder, then, that Hutton has been able so successfully to conjure up its spirit, and even more remarkably, its impact, with a trio comprising acoustic piano, double bass and drums. Yet this emotionally charged music absolutely captures the spectacle of big-budget Hollywood film scores.

It is Hutton's third album, following Cross That Bridge (33 Jazz, 2006) and Songs From The Seven Hills (33 Jazz, 2008), both also recorded with trios. The first was made with bassist Mike Janisch and drummer Simon Lea, the second with Janisch and drummer Enzo Zirilli. They are excellent discs, lyrical and sinewy, but Legentis is Hutton's most ambitious recording to date, and he assembled a pitch perfect trio for it.

Asaf Sirkis is capable of limpid delicacy and precision, as his work with saxophonist Tim Garland, pianist Gwilym Simcock and guitarist Nicolas Meier has demonstrated; when power and passion are called for, as they frequently have been in his recordings with saxophonist Gilad Atzmon, the drummer's precision stays in place, despite the whirlwind of high impact stick work he generates. It is similarly high octane terrain that Sirkis is most often asked to inhabit here. Yuri Goloubev, who studied at Moscow State Tchaikovsky Conservatory and was the youngest bassist in history to be given the title Honored Artist of Russia, awarded by President Putin, did not start focusing on jazz until he moved abroad in 2005. A frequent collaborator with Sirkis, Goloubev recently released the highly recommended Titanic On A Bike (Caligola, 2011). He matches Sirkis beat for beat in the adrenalin stakes, while never losing the thread of Hutton's impressionistic, rapid-fire improvisations.

The emotional heat created by the trio is lowered on three tracks—the melancholic "Clouds," elegiac "Farewell" and piano-only "A Norsk Tale," which is inspired not by Hollywood but by Edvard Greig's Lyric Pieces for solo piano. But most of the time, the music is dramatic and powerfully built, while carefully avoiding cheap melodrama or bombast. "J.J." and "The Legentis Script" are positively anthemic, "Then There Were Four" reminiscent of the Esbjorn Svensson at its best, and "Wonder Why" rocks out in 7/8 time.

The group is augmented on four of the album's nine tracks. Heidi Vogel's wordless vocals add further atmosphere to "J.J." and "The Legentis Script," on the second of which she is joined by French hornist Jim Rattigan and flautist Keith Thompson. Rattigan is also heard on "Hymn Two," and Thompson on "Crying Wolf." The three guests add color, but are not central to the plot.

Tracks: J.J.; The Legentis Script; Clouds; There There Were Four; Hymn 11 (We The People); Wonder Why; Farewell; Crying Wolf; A Norsk Tale.