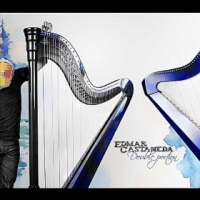 There is probably a greater chance of winning the lottery and being struck by lightning than building a career as a successful, world-renowned jazz Colombian harpist. Fortunately, Edmar Castaneda was more interested in pursuing his vision than studying statistics and probability. The Colombian-born harp phenom, who arrived in the United States in 1994, didn't have the benefit of following in the footsteps of others when it came to finding his way through jazz on his instrument of choice. He, however, had talent, determination and drive, which clearly helped him find success in his chosen endeavor.

His first two albums—Cuarto De Colores (Self Produced, 2006) and Entre Cuerdas (Artistshare, 2009)—were vibrant outings that featured some high-profile guests and highlighted the chemistry within Castaneda's one-of-a-kind trio. Flexible trombone wizard Marshall Gilkes and drummer/percussionist hybrid Dave Silliman joined with the harpist to form one of the most compelling threesomes around, but all things must come to an end and those two men are nowhere to be found here. Instead, Castaneda chooses to lighten the load on his third release, splitting the ten tracks evenly between solo performances and duo numbers.

Cuban pianist Gonzalo Rubalcaba, Puerto Rican saxophonist Miguel Zenon and Brazilian mandolina man Hamilton de Holanda join the Colombian harpist on a program of originals, save for Argentinean icon Astor Piazzolla's "Libertango," that has a pan-Latin sensibility. Rubalcaba's appearances provide two opposing views of this pairing, with the album-opening title track displaying some unnerving elements and dealing with the contrast between both men and "Ocaso De Mar" highlighting their interwoven ideas. Zenón and Castaneda breed fire when they join forces, engendering a wish that they'd connected on more than two tracks, but you can't always get what you want. Hamilton De Holanda only appears on the Piazzolla piece, but the lone opportunity to hear Castaneda interact, mano-a-mano, with this kindred spirit proves to be satisfying.

While much of the solo harp work early on proves to be a bit more relaxed and open-ended in nature, Castaneda kicks things into high gear on the album-ending "Samba For Orvieto." This tour-de-force display of musical machismo comes with percussive intensity, pianistic ideals and guitar-like allure, as Castaneda closes out the program with a bang. Double Portion is a departure from the harpist's previous work in scope, but not direction. In slimming things down, Castaneda provides an opportunity to hear his thoughts and conversations in more intimate settings, making this a valuable companion piece to his previous work.