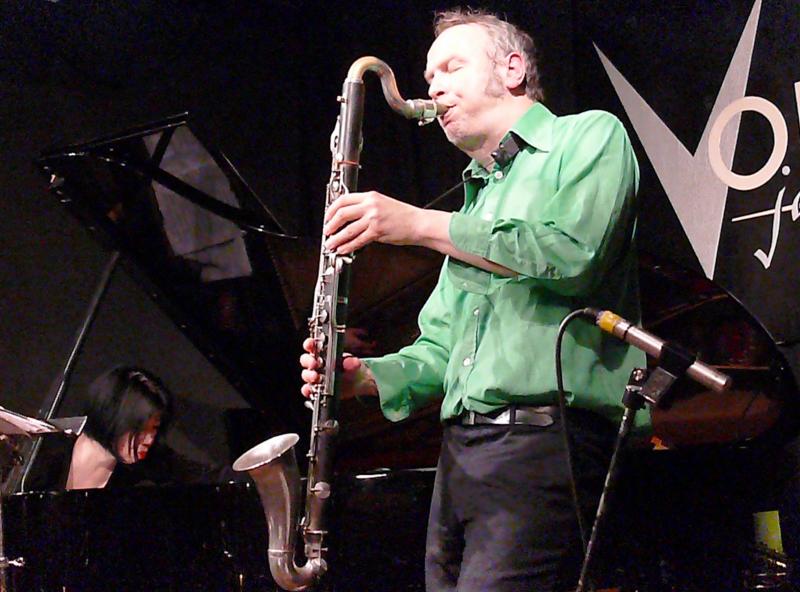 The last week in January at north London's Vortex was given over to a mini-festival curated by saxophonist Evan Parker, genteelly entitled "Might I Suggest." Sponsored by the Goethe Institute, it showcased several German-based musicians rarely seen in the UK. On paper at least, the highlight appeared to be the double bill showcasing in two contrasting halves, the husband-and-wife team of pianists Aki Takase and Alexander von Schlippenbach. That seemed a widely held view, as punters rammed the club to the gunnels. Even seating on the window sills had place names allocated.

Unusually, the pianist found herself largely cast in the role of the straight (wo)man as a foil to Mahall's exuberance. His idiosyncratic physical appearance, tall and thin, in a bright green shirt, swaying back and forward as he played, matched his musical delivery, which was supple, lissome and prone to sudden yelps and rasps. His amusing introductions completed the package. He dedicated two numbers to German trumpeter Axel Dorner, the first humorously titled "Trumpet for Beginners" being a buoyant toe tapper, quite unlike the dedicatee's normal fare, while the second "Wie Axel" was more abstract, featuring Takase plucking the strings inside the Vortex Steinway.

Mahall's homage to his touchstone reedman Eric Dolphy formed a particular feature of their set, manifest in renditions of several of his tunes, from a freely swinging "17 West" to a breakneck cover of "Miss Ann." Though occasionally whimsical, both participants displayed a deep knowledge and love of jazz history, evident in their choice of standards which stretched from a blues meditation on Duke Ellington's "Mood Indigo" to a tender version of Theo Mackeben's "Bel Ami" which diverged into Berlin cabaret. Their approach combined the playful and serious, often veering outside after an inside start, with Takase touching on stride and barrelhouse figures, as well as more extreme voicings. 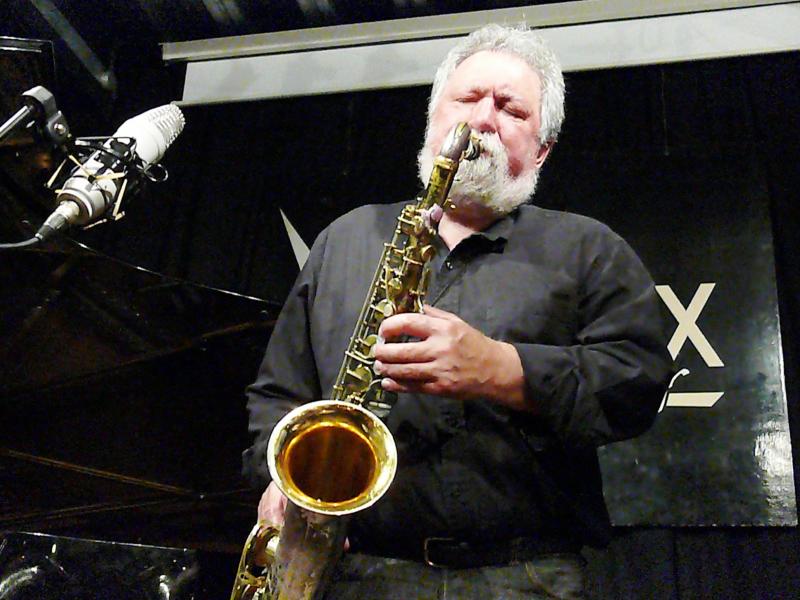 
The second half by the Schlippenbach trio with Evan Parker and drummer Paul Lovens, couldn't have been more of a contrast, comprising one lengthy piece with a short coda. There was no hint of the tradition, unless the similarities to the legendary '60s trio of pianist Cecil Taylor were taken into account. But Schlippenbach's unit has lasted for much longer than that seminal inspiration and has established a tradition and way of working which is entirely its own, being at the same time more democratic and more individualistic. What they shared with Taylor, at least tonight, was a burning intensity, albeit with more light and shade, achieved through an organic evolution.

Borne on overlapping waves of sound, their fizzing communion convinced as both natural and compelling: Lovens insistently spattering his kit; the reedman expostulating thick tenor saxophone tendrils while Schlippenbach created a grid of repeating patterns. With regard to how the set developed, it's worth quoting at length from the liners to the band's Swinging The Bim (FMP, 2000), where Parker states:

It would be wearisome to harp on about how long this group has been together. you can find the dates somewhere else. The fact is we've been playing together a long time and there is much in the broad structure of pieces which happens over and over again. This doesn't come through a lack of ideas but simply through the finite combinatorial possibilities of the number three. X, y and z can give you xy, xz and yz. And then xy(z), xz(y), yz(x) or then again (x)(y), (x)(z), (y)(z) or yes even (x) and (y) and (z). Interpret the symbols, signs and brackets any way you like, they're all true and they've all happened in almost every concert we ever played, but that explains almost nothing of interest. The interest is in how the life stays in it—especially for us, because if it's not there for us it can't be there for you. The explanation is in the difference is between the routine and the complacent. It has been asserted, almost pontificated, in some quarters that regular groups are somehow antithetical to the spirit of improvisation. Our counter assertion is that the unknown can only ever be approached from the known and this is true regardless from where and when you start...Or to paraphrase Buckminster Fuller, the more you know the more you don't know....

Tonight's spontaneous creation teemed with the life in it, although perhaps partly derived from adversity. Not long after they started, Parker retreated to the rear of the stage, having become aware of a problem with the key rod of his tenor saxophone. First he sought to fix it with gaffer tape from the stage floor. When that didn't work, he resorted to applying wax from a candle on a front row table, which eventually solidified to secure the mechanism such that he could continue playing. The hiatus led to an extended dialogue for piano and drums, with Lovens seizing the spotlight. The drummer was on fire this evening. Schlippenbach repeated tightly formed phrases in tandem with his compatriot's dry crisp snare before pausing to leave the percussionist unaccompanied. 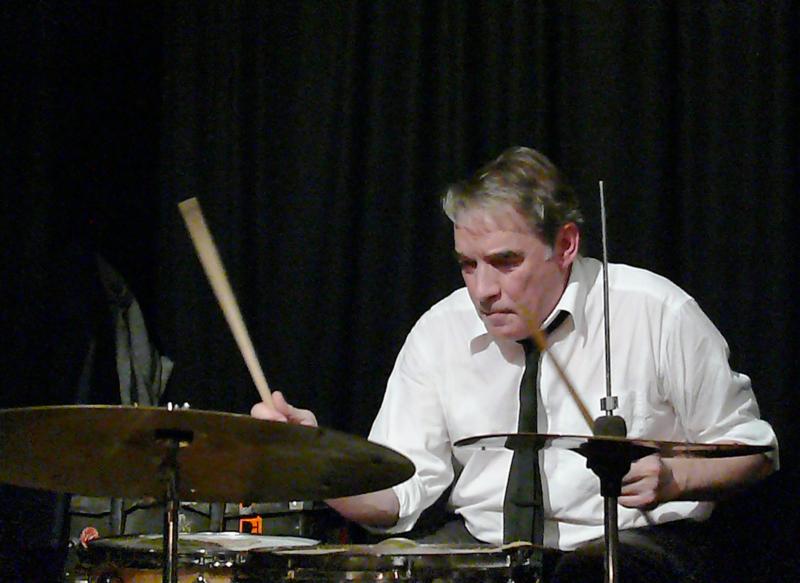 
Lovens demonstrated his mastery of texture and momentum, deploying an array of variously sized cymbals on his drum heads, extracting bracing random metallic crashes, while dampening them with his hand or sticks to attenuate and control the resonance. In his quest for timbral variation he continually adjusted his attack, utilizing untethered cymbals and small cloth patches for an ever-changing sequence of tone colors, astonishing to behold.

Once the saxophonist rejoined, he opened out into a circular breathed soliloquy on tenor saxophone, calling forth multiple lines and evoking a hint of a bagpipe drone. Through the remainder of the piece, the Englishman's circular breathing recurred at various points, the unbroken chorus acting almost as a leitmotif, a base camp from which to launch further excursions. Towards the conclusion the pianist turned romantic for a haunting ballad passage with mournfully lyrical tenor and madcap percussive accents, before one final peak of incendiary colloquy.

That wasn't quite the end. For the cherry on the cake, the three combined for a short cooling balm of delicate harmonics which proved the perfect finale to a wonderfully rounded night demonstrating the breadth of expression in contemporary European jazz. Allegedly recorded for broadcast on German radio, the show might yet become more widely heard, as indeed it deserved.