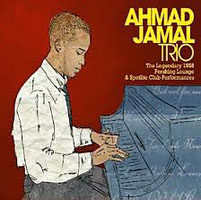 "Play like Jamal," trumpeter Miles Davis is reputed to have told his pianist Red Garland in the mid 1950s. We can but speculate how Garland reacted to this request, assuming the story is true. It has the ring of truth: Davis was not best known for mincing his words, and he championed Ahmad Jamal at a time when many jazz critics were dismissing him as a lightweight cocktail bar pianist. "All my inspiration today comes from Ahmad Jamal," Davis is reliably recorded as saying.

Record producer John Hammond was another early Jamal enthusiast, signing him to the Columbia Records subsidiary Okeh in 1951, when Jamal was 21. Jamal recorded some enduring early classics for the label between 1951-55, collected on the 2CD set The Legendary Okeh & Epic Recordings (Columbia Legacy, 2005).

It was not until 1958, however, and the runaway success of the live album But Not For Me: At The Pershing (Argo/Chess), that Jamal really arrived on the US jazz scene. He has been one of its jewels ever since, and his greatness was quasi-officially acknowledged in 1994, when he was named a Jazz Master by the National Endowment of the Arts. In early February 2012, at age 82, after six decades of outstanding recordings, Jamal will release another remarkable and entrancing disc, Blue Moon (Jazz Village).

This three-CD collection on the obscure European label Solar Records homes in on Jamal's breakthrough year. Disc one consists of But Not For Me: At The Pershing and At The Pershing Volume Two (Argo/Chess, 1960), both recorded at Chicago's Pershing Lounge on January 16 and 17, 1958; disc two and the first half of disc three include all surviving 25 tracks recorded at Washington's Spotlite Club on September 5 and 6, 1958, and since variously and/or partially released under variants of the title Ahmad Jamal At The Spotlite (Argo); the second half of disc three rewinds a couple of years to 1956's Count 'Em 88 (Argo). On all but the 1956 album, where the drummer is Walter Perkins, Jamal leads a trio featuring bassist Israel Crosby and drummer Vernel Fournier.

As a bonus track, disc one includes a 1955 recording, made with Crosby and guitarist Ray Crawford, of "Poinciana" (not a Jamal original, but following its interpretation on But Not For Me: At The Pershing, forever associated with him).

With the exception of the 4:33 minute bonus track, and a 45rpm edit of the Pershing's "Poinciana," all of this material is included on Mosaic Records' nine-CD collection The Complete Ahmad Jamal Trio Argo Sessions 1956-62 (2010). The Solar set offers roughly one-third of the Mosaic material for roughly one-fifth of its price, but with Mosaic you get an authoritative liner booklet put together by drummer Kenny Washington and Mosaic's Michael Cuscuna. The Solar booklet is more modest, though it does include a few pages extracted from R.J. DeLuke's excellent 2004 All About Jazz interview with Jamal.

How deep is the ocean? How deep are your pockets? However you get to hear them, these 1956 and 1958 recordings are among the most uplifting ever made.

Tracks: CD1: But Not For Me; The Surrey With The Fringe on Top; Moonlight In Vermont; Music! Music! Music! (Put Another Nickel In); There Is No Greater Love; Poinciana; Woody'n You; What's New?; Too Late Now; All The Things You Are; Cherokee; It Might As Well Be Spring; I'll Remember April; My Funny Valentine; Gone With The Wind; Billy Boy; It's You Or No One; They Can't Take That Away From Me; Poor Butterfly; Poinciana (single version); Poinciana (1955 studio version). CD2: Ahmad's Blues; It Could Happen To You; I Wish I Knew; Autumn Leaves; Stompin' At The Savoy; Cheek To Cheek; The Girl Next Door; Secret Love; Squatty Roo; Taboo; Autumn In New York; Gal In Calico; That's All; Should I?; Seleritus; Let's Fall In Love. CD3: This Can't Be Love; Ole Devil Moon; Ivy; Tater Pie; Aki And Ukthay (Brother And Sister); You Don't Know What Love Is; I Didn't Know What Time It Was; So Beats My Heart For You; Our Delight; Soft Winds (studio version); Secret Love (studio version); Taking A Chance On Love (studio version); Volga Boatman; On Green Dolphin Street; How About You?; I Just Can't See For Lookin'; Spring Will Be A Little Late This Year; Beat Out One; Maryam; Easy To Remember; Jim Loves Sue.