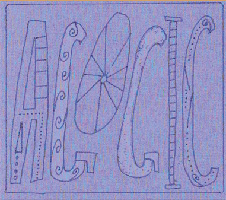 Defined as "accenting a musical note by extending it slightly beyond its normal time value," AGOGIC is the evocative name adopted by the seasoned front-line of multi-instrumentalist John Lonacker (alto saxophone, bass clarinet) and trumpet player Cuong Vu for a multi-generational collective featuring electric bassist Luke Bergman and drummer Evan Woodle, two of Seattle's most promising young upstarts. Longstanding veterans of the vibrant 1990's Brooklyn scene, D'Angelo and Vu recently moved back to the Emerald City, their childhood home. Their relocation and subsequent recruitment of Bergman and Woodle as part of AGOGIC demonstrates the creative potential of scenes outside of New York, Chicago and Los Angeles.

The group brims with capricious energy on their self-titled debut, inspired in part by the youthful rhythm section but also by D'Angelo, who is infamous for his extroverted onstage antics. Interlocking funk rhythms drive tunes like "Two Well" and "Use 2," which spotlight Bergman and Woodle's adroit syncopation while simultaneously enhancing D'Angelo and Vu's spirited contrapuntal interplay—a recurrent highlight of the session established at the onset of the opener "En Se Ne," a progressively deconstructed blues abstraction. Though the testosterone-fueled attack of Bergman's overdriven fuzz bass and Woodle's rock-inflected beats provide fervent energy to D'Angelo's histrionic altissimo outbursts during the climax of "Acid Kiss," it is during introspective fare—like the same number's unassuming introduction—that the ensemble's nuanced abilities truly come to the fore. Glacially building from hushed Miles Davisian fragments to coruscating vocalizations, Vu's dramatic trumpet solo ascends in concert with the rhythm section's increasing velocity—before they shift into high gear for D'Angelo's acerbic tirade.

Embracing dynamic territory beyond kinetic workouts, "Old Heap" and "Gently Shifting Next" weave hypnotic bass lines and understated rubato percussion around legato melodies spun from horns bathed in reverb and delay, reveling in the long tones and atmospheric impressionism implied by the band's name. "Felicia" is the most striking inclusion of the set, a gorgeous ballad written by D'Angelo that portrays another aspect of his persona—one of unflinching sentimentality and emotional resolve.

Following in the footsteps of such renowned ensembles as Bloodcount and Human Feel, AGOGIC brings its own unique sensibility to the modern electro-acoustic piano-less quartet tradition. Tempering the fiery enthusiasm of youth with the cool wisdom of experience, the group's self-titled debut presents the Pacific Northwest's burgeoning creative improvised music scene as a viable alternative to Gotham's abiding influence.