Luke Bergman is a multi-instrumentalist, vocalist and recording artist based in Seattle, WA. His voice, bass and guitar work have been utilized in groups he writes for like Heatwarmer as well as sideperson work with Bill Frisell, Cuong Vu, Andrew Bird and others. His output as a solo artist focuses on his arranging abilities of jazz, folk and pop repetoire. He's made an album of solo guitar, and multiple albums that feature his pedal steel guitar playing. His most recent release, "Worx," is a home-recorded collection of ten original compositions. Recording all the instruments he plays, the album focuses on contrapuntal melodies and creative orchestration and has the feeling of the soundtrack of "Donkey Kong Country as a Hallmark movie." 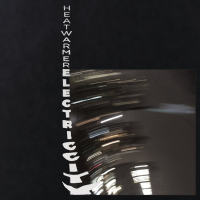 Iconic guitarist-composer Bill Frisell has chosen to primarily emphasize the Americana side of his music for his debut as a leader for Blue Note Records. When Frisell organized his new band with vocalist Petra Haden, cellist Hank Roberts and guitarist-bassist Luke Bergman he was struck by the fact that all of the band members but him ...

Seattle-based trumpeter Cuong Vu continues his collaboration with guitarist Bill Frisell that began with It's Mostly Residual (AUAND, 2006). His previous 4Tet release, Ballet: The Music Of Michael Gibbs (RareNoise Records, 2017), was also made by the same personnel. But this time, instead of interpretations of an outside composer, every group member contributes compositionally, including Vu, ...

Trumpeter Cuong Vu introduced this particular 4tet in 2017, with Ballet: The Music of Michael Gibbs (RareNoiseRecords). An all star affair that included guitarist Bill Frisell, bassist Luke Bergman and drummer Ted Poor, it seemed to signal something of a gentler Cuong Vu, with a music that had a spaciousness, patience and ruminative quality that didn't ...

Carmen Rothwell: The Art of Intuition

Seattle, a city synonymous with alternative rock, has long sustained a provincial jazz culture, without a signature sound, but with an openness to innovative, progressive invention. To outside jazz partisans, the city is known for phenomenal high school talent that usually flies the coop, heading east for conservatory training and to pursue professional ambitions.