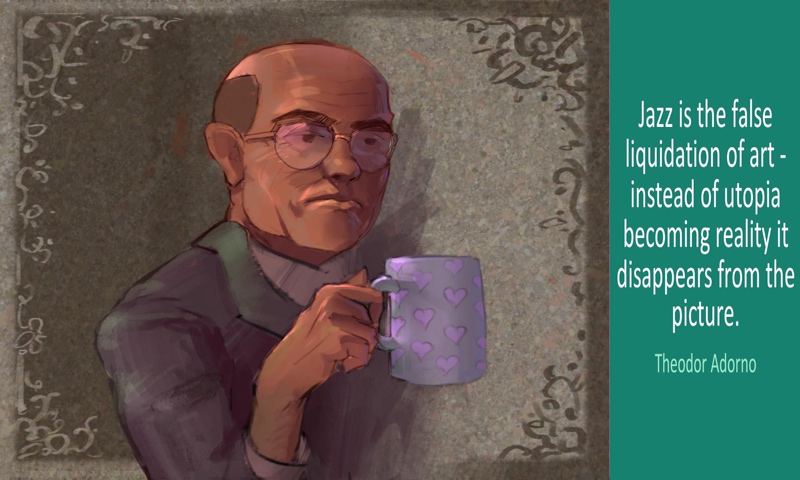 Though Adorno had many points of criticism regarding the technical aspects of jazz, his contempt for the music genre was fueled by something else. Given the fact that Adorno was best known for his critical theory of society, it is far from surprising that jazz would not escape a social deciphering in his essays."Jazz is not what it 'is,'" he claims in Über Jazz; jazz is defined by the role it plays in society. It is this belief that led Adorno to form his most aggressive opinions on jazz yet, many of which may puzzle us even when attempting to place them within the historical and geographical context of Weimar Germany.

One of Adorno's most confusing statements regarding jazz, is what he called the "Negerfabel." Not only did he continuously deny the African-American heritage of jazz music, he also went so far as to claim that "the Negro's skin" was merely a "colouristic effect": nothing more than an aggressive marketing tool, that was meant to give the music an exotic touch. Throughout the years, Adorno remained convinced that jazz was undoubtedly a white man's music, and insisted its predecessors were to be found in European salon music and the march. Adorno's refusal to acknowledge both jazz's African and American origins, reveals the extent to which his analysis was laden with eurocentrism. As we previously discussed, many of Adorno's opinions on jazz were formed within the Weimar Republic of Germany, and must therefore be interpreted accordingly. Before reaching Central-Europe, jazz had already been subjected to two processes of musical acculturation, in which its African-American elements were first toned down for white American consumers, and later all but nullified for European audiences. Considering Germany in particular had been culturally isolated since World War I, it is not too surprising that German musicians relied heavily on European, commercial music to create their own home-grown equivalent for jazz. Adorno was correct in recognizing two musical styles that contributed to the birth of Weimar jazz, namely that of the salon orchestra and the military march band.

In addition to being a predominantly white and European music genre, Adorno also asserted that jazz was the "Gebrauchsmusik" of the upper class. It was a product in the strictest sense; intended for consumption by the grand bourgeois of society: a handful of dance groomed aristocrats that had the time and money to learn the newest dance trends. Needless to say, it did not take long before jazz gained immense popularity and spread throughout the echelons of society. Adorno divided jazz into two main categories: hot music and amateur jazz. Hot music could be identified by its high technical demands and improvisational freedom, which set its small, elite audience apart from middle-and working class consumers. Amateur jazz on the other hand, was the umbrella term for more commercial jazz music, particularly popular amongst younger audiences, such as the Swingjugend. According to Adorno, the novelty effects and musical outbursts of these rebellious youngsters were not created in a true revolutionary spirit, and instead served the sole purpose of épater la bourgeoisie.

As J. Bradford Robinson cleverly mentions in Popular Music*, it is interesting to point out that Adorno accurately documented the exact inversion of the social dispersion of jazz music in America. Both American and German jazz started out with social minorities and spread through society via processes of acculturation and imitation. It is curious that, although they developed in the same way, they moved in the exact opposite direction: American jazz music emerged from the lowest rungs of the African-American community, whereas German jazz was first established by the cream of society.

Adorno regarded this mass distribution of commercial jazz music as highly unfavorable, and claimed that "the more democratic jazz is, the worse it becomes." He insisted that, as jazz marched down the ranks of society, it gradually dropped all its revolutionary features in order to appeal to the broad public. What was left was a popular "musical accompaniment of collective fashion," that did "little more than glorify suppression itself."

We have now reached what seems to be the root of Adorno's contempt for jazz: his conviction that it was irrevocably intertwined with fascism and even Nazism. This may well be his most puzzling statement yet. Was jazz not banned from all Nazi broadcasting stations in the early thirties? Was it not seen as the very music of "the era's modernism"; a sentimental yearning for the American democracy and way of living? What brought Adorno to make these bizarre allegations? Unfortunately, there is no clear-cut answer to these questions, and it is no surprise that many jazz historians have dismissed Adorno's writings altogether. There are, however, several historical factors that point us in the direction of understanding his claims a little better.

Despite indeed being banned from Nazi broadcasting stations, it is misguided to assume that jazz instantaneously disappeared from Germany's popular culture. There were in fact no immediate restrictions in early Nazi Germany regarding the performing or attending of jazz concerts in hot clubs, and instead, the Reichsministerium resorted to anti-jazz propaganda. It was this propaganda that resulted in a most peculiar development of commercial jazz music, which as it were gradually devolved; dropping its innovative elements and returning to its German predecessor: the military march. By the time Adorno wrote his first essay on jazz, this transformation was almost complete; "jazz" had already succumbed to the German "oom-pah" propaganda, and no longer shared any musical features with authentic American jazz. Furthermore, the fact that Germany had its own Nazi-sponsored swing band is often ignored by historians. Charlie & His Orchestra was the initiative of Joseph Goebbels, who saw in jazz the opportunity of combining popular culture with Nazi propaganda. The result was a relatively sophisticated sounding jazz band, playing well-known American jazz standards with pro-Nazi lyrics. Their music was by far the most authentic sounding jazz that was permitted on German radio stations, and may slightly help clarify Adorno's wild accusations.

Does this fully explain why such an intelligent man as Adorno insisted that "jazz and pogrom goes hand in hand"? Perhaps not entirely. Nevertheless, his jazz essays do offer us an interesting and historically valid take on the Weimar and Nazi jazz scene, a topic that was not initially open to much discussion. It is careless and intellectually dishonest to simply ridicule and dismiss his writings as "the stupidest pages ever written about jazz"*, for they shed light upon an under-documented chapter of cultural history.