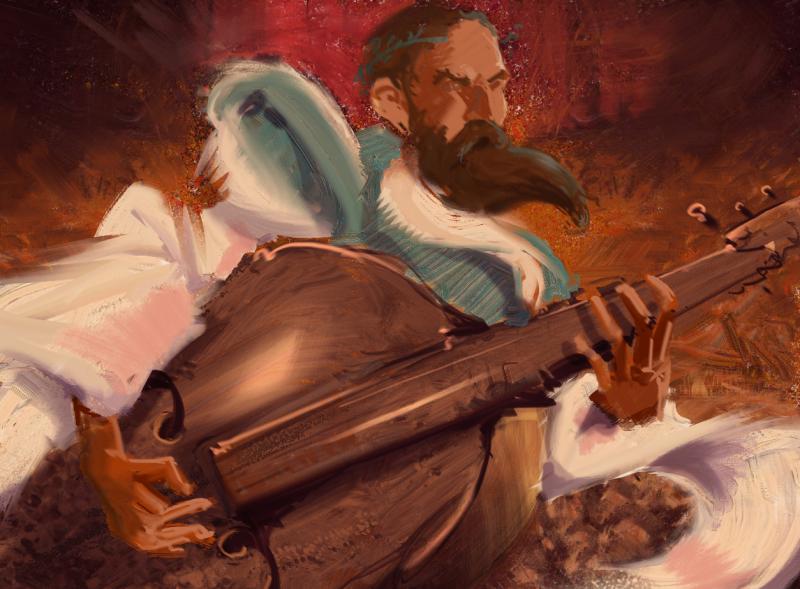 By Marithe Van der Aa
January 23, 2017
Sign in to view read count
"The safest general characterization of the European philosophical tradition is that it consists of a series of footnotes to Plato." (Alfred North Whitehead, Process and Reality, p. 39 [Free Press, 1979])

Have you ever wondered what one of the most celebrated philosophers of Ancient History might have thought about jazz music if he had lived to witness its development? There are several fragments of Plato's writings that may point us in the direction of finding out.

Given that The Republic is mainly a work on political theory and justice, Plato spends a surprising amount of time discussing music in it. In fact, he even goes so far as to say that music education should come before any other form of schooling, as it is primarily capable of imparting grace to the soul. The idea that a certain mysterious link exists between music and the human soul, is a concept much older than Plato, and was originally introduced by the Greek philosopher Pythagoras. It was his belief that music imitates human qualities and sentiments by means of specific combinations of melody, harmony and rhythm, and evokes these same qualities and sentiments in the listener; one who listens to violent sounding music, will subsequently become violent himself.

Since it has this supposed ethical influence on the human psyche, Plato believes music should have a crucial role in the education of the young. Furthermore, the music available to the public must be purified, as it is of utmost importance that citizens grow up to be just and honorable. Complex rhythms and systems of meter may cause irregularity and chaos in the soul, and should therefore be strictly prohibited in Plato's ideal State. Instead, rhythmical expressions of courage and balance ought to be encouraged, for these will stimulate the praiseworthy qualities of the soul.

Plato's choice of appropriate musical scales is slightly more specific: The Mixolydian and Syntonolydian scale are used to express grief and sorrow, and since these are not suitable sentiments to have, they must not be tolerated. Similarly, Plato rules out the Ionian and Lydian scale, which are known for their complacent and relaxed atmosphere. The Phrygian and Dorian scale resemble moderation and courage, and are therefore the only scales worthy of being played in the State.

At this point, the jazz musician may start to feel slightly confused. Since when does the Lydian scale sound so laid-back? And is the Prhygian scale not more melancholic than the Mixolydian? Unfortunately, the modes we now know and use extensively in jazz music, are but a medieval misinterpretation of Ancient Greek music theory treatises. In fact, the Homeric scholar David Binning Monro once wrote that the theory of a system of modes in the modern sense of the word finds no support from earlier authorities on Ancient Greek music. The original scales or modes were initially named after ethnic groups and tribes in and around Ancient Greece, and accordingly embodied their different philosophies and outlooks on life. For instance, the Dorian scale symbolised the military traditions and discipline of the Spartans, while the Ionian scale represented the hedonistic democrats of Miletus and Athens.

Taking this into account, it is not all too surprising that Plato evaluates the different modes according to their distinct characters, however, Plato's lecture on music does not end there. In book IV of the Republic, he insists that "any musical innovation is full of danger to the whole state and ought to be prohibited," for "when the modes of music change, the fundamental laws of the State always change with them." Furthermore, the following passage found in Plato's last and longest dialogue, the Laws, may continue to perplex:

"They have inspired the multitude with lawlessness and boldness, and made them fancy that they could judge for themselves about melody and song... in music there first arose the universal conceit of omniscience and general lawlessness; freedom came following afterwards and men, fancying that they knew what they did not know, had no longer fear, and the absence of fear begets shamelessness. For what is this shamelessness, which is so evil a thing, but the insolent refusal to regard the opinion of the better by reason of an over-daring sort of liberty?"

By now it should be more than apparent that Plato would have detested each and every form of jazz music. But why was Plato so keen on limiting both the artistic and political freedom of his citizens? Indeed, the concept of freedom plays a key role in Plato's ideology. It was his belief that in an ideal state, those who are less intelligent should, for their own benefit, obey those who are more intelligent. In this situation, those who lack intellect are not necessarily less free, as they would voluntarily subject themselves to their rulers. The democratic man, according to Plato, is a slave to his own personal desires and can therefore never be truly free. Additionally, the 'freedom' to cater to his own personal desires and needs are more often than not a direct threat to the well-being of the State as a whole.

It seems that Plato's convictions stem from a deep-rooted skepticism towards the democracy as a political constitution. What exactly triggered Plato's negative attitude towards the liberal government? The answer may be more personal than you think.

Plato's youth was largely influenced by the Peloponnesian War; in fact, the war almost spanned Plato's entire childhood and early adulthood. The Peloponnesian war, primarily a conflict between the oligarchic Sparta and Plato's democratic home town Athens, came to an end in 404 BC, at which time Athens' government was replaced by an oligarchical tyranny, more commonly known as the thirty tyrants. No more than eight months later, the tyranny was overthrown by a new and more radical democracy. At this point, the citizens of Athens turned against Plato's mentor Socrates, whose family and relatives had been involved with the thirty tyrants. Socrates was consequently accused of being anti-democratic and was to be trialled for corrupting the youth, which eventually led to his death sentence.

It goes without saying that this event had an enormous impact on Plato and the light in which he saw democracy and its supporters. However, should a philosopher not aim to be impartial to his personal experiences and prejudices? Perhaps if Plato grew up in the 20th century, he would have tolerated jazz music. At least he would have enjoyed Miles Davis' So What...