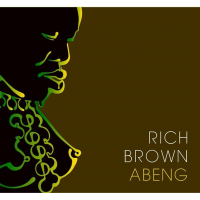 In jazz, it's all about the company you keep. The press accompanying bass virtuoso Rich Brown's third album, Abeng, specifically calls out Roy Ayers and Weather Report as musical reference points. And while there's a breath of Ayers' silky R&B feel to the slinky "Promessa," and though Brown's use of his fretless electric bass as a lead voice favorably recalls Jaco Pastorius' tenure in Weather Report, Abeng is more intensely colored by the music of Brown's past and current associates, namely Rudresh Mahanthappa, Dapp Theory, and Steve Lehman (to name a few). These 21st Century influences are most evident in the brainy, plugged-in nu-fusion of "The Etymology of Ouch," "Achilles and the Tortoise," and "Mahishmatish." Drummer Larnell Lewis' playing on these tracks, and really throughout the entire album, is utterly astounding.

Unlike a lot of other young virtuosos, Brown is broad-minded enough to include a pair of ballads on Abeng. "This Lotus Ascension" recalls John Coltrane's "Naima" as much as it does Wayne Shorter's "A Remark You Made." Luis Deniz' impassioned alto and Robi Botos' rhapsodic piano are particularly effective here. "Parity of Esteem" is really only half a ballad, since it starts as one but slowly transforms into a sinister groover featuring an appealingly turbulent solo by Myriad3 pianist Chris Donnelly underpinned by Lewis' impossibly busy, yet pitch-perfect, drumming. Percussionist Rosendo Chendy Leon's congas and bata drums figure prominently on "Chant of the Exiled," a piece that recalls Steve Coleman's work with Afro-Cuban percussionists. "Promessa" takes some of these rhythmic archetypes and recasts them in an R&B-flavored fusion style, with the leader's lush electric bass way out front.

With Abeng Rich Brown has crafted a definitive musical statement that ties together a lot of seemingly disparate strands of the Black cultural experience in a creative and personal way. Highly recommended.

Mahishmatish; Window Seat; Chant of the Exiled (Abeng); Promessa; This Lotus Ascension; The Etymology of Ouch; Parity of Esteem (An Illustration of Imbalance); Achilles & the Tortoise.