Peter Brötzmann: A Night In Sana'a 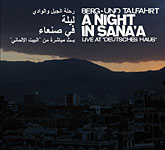 Reaching across cultures is nothing new for jazz artists, and certainly jazz (by definition) is the amalgamation of ethnic European, African, Afro-Cuban and American blues music. With this recording by free jazz patriarch Peter Brötzmann in Yemen, the junction is not only of different cultures but of different centuries.

Record label chief Uli Armbruster shared recordings of traditional Yemeni music with the saxophonist, convincing him to travel to Sana'a in 2004 to perform. He arrived with Chicagoan and first generation Assyrian-American drummer Michael Zerang to rehearse and perform with a quintet of classically trained Yemeni musicians.

That the Arabic musicians had never considered the 20th (or 21st) century concept of improvisation is reflected in the music of this live concert. But, with rehearsals and the exchange of ideas, the two jazzmen met the five Middle Eastern musicians halfway.

Traditional pieces open and close the recording. The Yemeni musicians playing the kanoun (zither), nay (wooden flute), darbuka (hand drum), cello and violin are joined by Zerang on drums and Brötzmann, playing clarinet and tenor saxophone. In deference to his hosts, Brötzmann's signature torrential attack is held in check for the most part; what develops, though, is the musicians' ancient style opening up to Brötzmann's untethered sounds.

The four remaining tracks are Brötzmann compositions, the accompaniments the result of the saxophonist's hosts transcribing his melodies. The results are beautifully polite, with the Yemeni musicians loosening their structures and Brötzmann thriving in their Arabic vibe. Occasionally, as on "The 3 Back 2 Procedure," only Zerang can follow the saxophonist's improvisational flights, but not to worry; his new friends are waiting for him once he returns to earth.

Aza-Hu Wa Adhla-Ni (traditional); Borne Back Home; Jumpin' And Rollin'; The 3 Back 2 For Procedure; Song For Fred; Ya Nasim Al-Sahri (traditional).