"A Love Supreme" with Ravi Coltrane 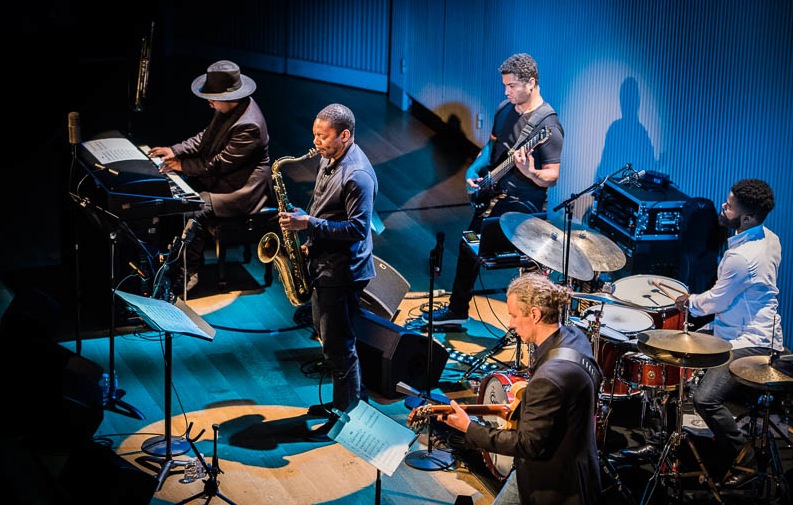 "It's one of his great, great records... The music and creative expression that came from John, it's overwhelming—you know, to think of what he was able to achieve with this brass tube with buttons on it." —Ravi Coltrane, as quoted by Richard Scheinin in the Mercury News

It would have been his father's 91st birthday. To mark the occasion, his son took the stage to front a gifted ensemble who would perform one of his classics. He chose to refashion, rather than recreate, his father's famous jazz album. A packed house was present for this, the second show of that evening. Such was the scene when Ravi Coltrane and company performed their version of A Love Supreme (Impulse, 1965) at SFJAZZ on September 23rd, 2017.

One of the most acclaimed jazz albums of all time, many fans and critics regard A Love Supreme as John Coltrane's masterpiece, one on which he played exclusively tenor. Released in 1965, it had already sold 500,000 copies by 1970. Its influence continues to this day. A four-part suite, A Love Supreme is divided up into "Acknowledgement" (which contains the chant which gave the suite its name), "Resolution," "Pursuance" and "Psalm." John Coltrane played tenor exclusively throughout the suite. While the composition reflects Coltrane's upbringing in the Protestant church, some believe it was also influenced through his exposure to Islam. It was conceived as a way of expressing Coltrane's thankfulness to the creator for his musical talent.

Clad in gray, Coltrane, entered and blew on his tenor to mark the start of his father's composition "Crescent" (not featured on A Love Supreme). Matthew Garrison (son of John Coltrane Quartet bassist Jimmy Garrison) came in on electric bass as Coltrane stepped away. Drummer Marcus Gilmore (grandson of John Coltrane collaborator Roy Haynes) employed his mallets skillfully. Then Nicholas Payton, wearing his trademark black top hat, entered and sat down at his Fender Rhodes. Innovative electric guitarist Adam Rogers, who has played with the likes of Bill Evans and Chris Potter, then joined in, pressing down one of the numerous pedals at his feet and then soloed. Payton took trumpet in hand again and blew.

The group then moved into the advertised feature. "Acknowledgement" began with its chant of "A Love Supreme." Then, the lights dimmed as Gilmore took an extended, highly improvisational, rapid fire solo. Then Coltrane re-entered. Payton looked on intently as he blew; Payton, after a stint on his organ, soloed on his trumpet.

Rogers was given his time in the spotlight, building up a sonic wall with his carefully-fingered guitar, before the band re-entered. Coltrane soloed, then Peyton, who concluded his solo amidst applause. At the end, the lights went dim, then up. A standing ovation brought the musicians all together, their hands around each others shoulders. They took a bow.